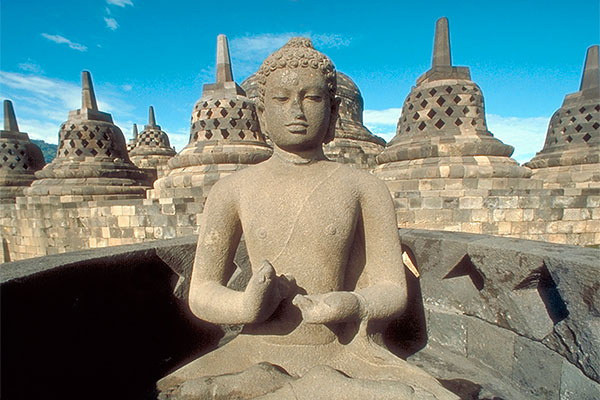 
Sometime before the 5th century AD, the influence of Hinduism and Buddhism spread southward from the mainland of southeast Asia to the islands of Sumatra, Java, Bali and a few others in the archipelago currently called Indonesia. (It is misleading to think of all of Indonesia as either an ancient empire or the province of any particular religion. The vast archipelago of over 13,000 islands became the nation of Indonesia only in 1949 and only a few of its major islands were ever settled or much influenced by Hinduism, Buddhism or Islam). There are no archaeological remains of temples in the Indianized states of Java prior to the end of the 7th century as the early Hindu structures were built of wood and have long since decayed in the moist tropic climate. The first stone temples, Shiva shrines constructed during the 8th century, are found high on the Dieng plateau, the name Dieng meaning 'the place of the gods'. The greatest concentration of Javanese sacred architecture, however, lies on the plain of Kedu, some 42 kilometers north-west of the present city of Yogyakarta. Here stands the beautiful Hindu temple complex of Prambanam and the world famous Hindu/Buddhist temple of Borobudur.

Borobudur, a name deriving from an expression meaning 'Mountain of accumulation of merits of the ten states of Bodhisattva' is commonly thought of as a Buddhist structure, yet its initial construction was planned and conducted by Hindu builders sometime around 775 AD. The enormous first and second terraces were completed by a declining Hindu dynasty, construction was then halted for some years, and later, from 790 to 835 AD, the Buddhist Sailendra dynasty continued and finally completed the great stupa. The huge stone mass might have then been permanently abandoned, for it was difficult to adapt to the needs of Buddhism. However, leaving in evidence such an obvious manifestation of Hinduism was probably not deemed politically correct and thus the unfinished Shiva temple was transformed into the world's largest Buddhist stupa. After 832 AD the Hindu dynasty of Sanjaya began to reunify central Java and soon reappropriated the Buddhist monuments built by the Sailendra. Although the Sanjaya were themselves Hindu, they ruled over a Buddhist majority and thus, while some Hindu modifications and ornamentations were done on Borobudur, the stupa remained a place of Buddhist use. During the 10th and 11th centuries there was a transfer of power from central Java to the east, and the great stupa fell into decline. For centuries the site lay forgotten, buried under layers of volcanic ash and jungle growth. In 1815 Europeans cleared the site, in the early 1900's the Dutch began its restoration, and a US$21 million project begun in 1973 completed the work.

The Borobudur stupa is a massive, symetrical monument, 200 square meters in size, sitting upon a low sculptured hill. The monument represents a Buddhist cosmological model of the universe organized around the axis of mythical Mt. Meru. Starting at the eastern gateway, pilgrims circumambulate the stupa, always in a clockwise direction. Walking through nearly five kilometers of open air corridors while ascending through six square terraces and three circular ones, the pilgrim symbolically spirals upward from the everyday world to the nirvanic state of absolute nothingness. The first six terraces are filled with richly decorated relief panels in which the sculptors have carved a textbook of Buddhist doctrines and a fascinating panorama of 9th century Javanese life. Upon the upper three terraces are 72 small stupas, each containing a statue of the Buddha (these statues are usually headless; relic hunters stole many of the heads, others are in museums). Crowning the entire structure is a great central stupa. Representing Nirvana, it is empty. 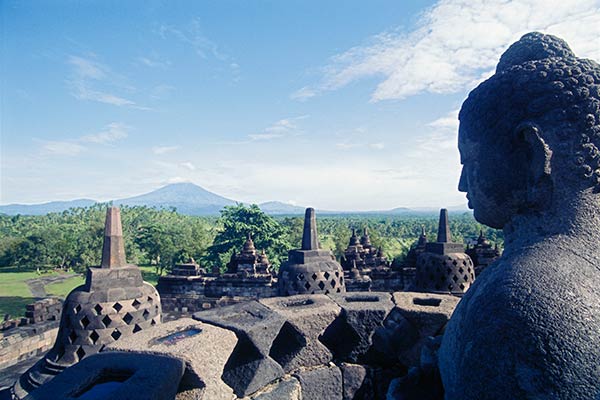 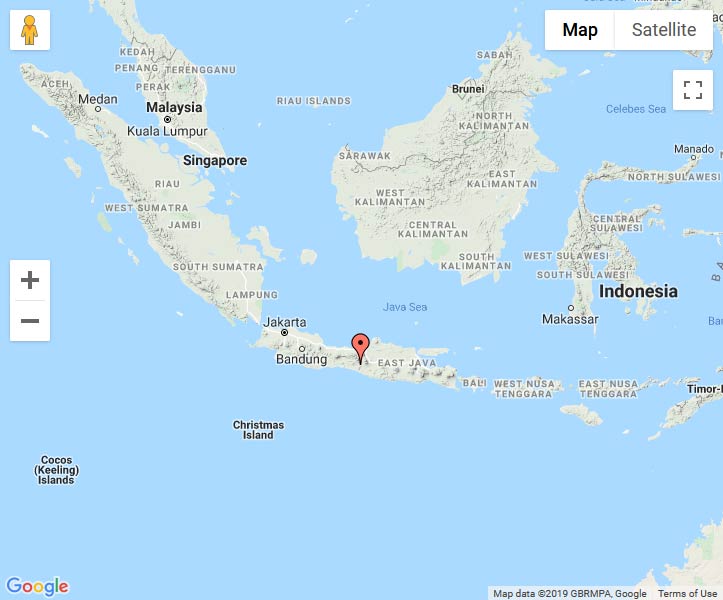