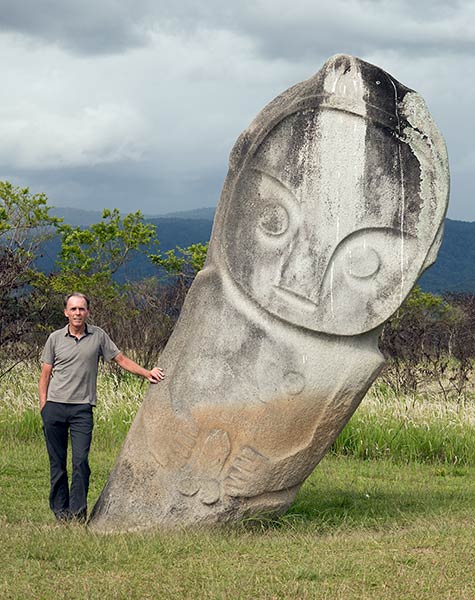 The matter of when, by whom, and for what reason the enigmatic megalithic artifacts of central Sulawesi were created is one of the world's greatest archaeological mysteries. There are two theories – one plausible, the other highly speculative - that can be considered.

Multidisciplinary evidence indicates that human settlement in Southeast Asia dates back at least 55,000 to 65,000 years. Until about 15,000 years ago, the sea level was around 125 meters lower than current levels. The area that is now 60 meters under the Java Sea was part of a Southeast Asian peninsular subcontinent known as Sundaland, which included the Malay Peninsula, the islands of Sumatra, Java and Borneo, while the island of Sulawesi and the Philippines would have been visible and reachable by boat. This Sundaland landmass was exposed during most of the last glacial period between 110,000 and 15,000 years ago. The lower sea levels would have allowed land-based migration and sea travel within sight of land. It was during this period, probably between 50,000 and 30,000 years ago that humans first came to what is now the island of Sulawesi.

At the end of the LGM, or Last Glacial Maximum 19,000 years ago, global warming caused sea levels to rise and a vast area of land was inundated. It is likely that there were three major episodes of accelerated sea level rise and these occurred approximately 14,500, 11,500 and 7,500 years ago. It was during or following these periods that the island of Sulawesi was formed and any cultures existing there became isolated from the rest of Southeast Asia. It should be noted that much later arrivals by Austronesian groups into the islands of southeast Asia (Eastern Indonesia) happened around 4500-6300 years ago when the sea levels were equal to present times and technology existed for extensive ocean voyaging to islands that were out of site over the horizon. The origins of the mysterious megaliths on Sulawesi date from long before this time. 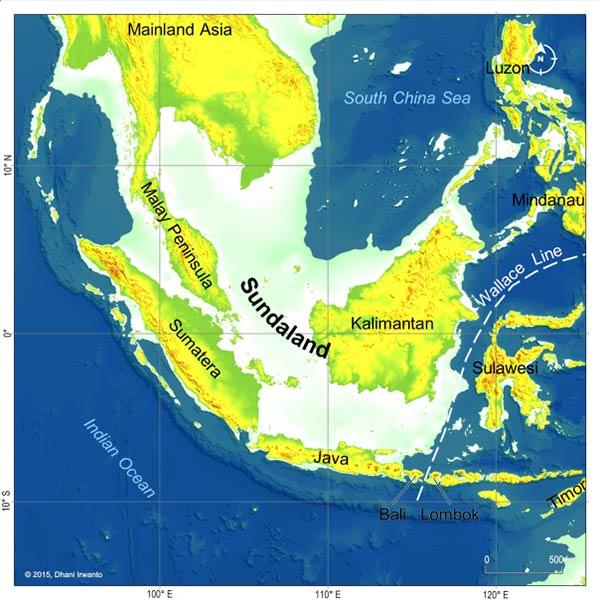 400 of these megalithic artifacts are scattered in an apparently random manner across the Napu, Besoa and Bada Valleys of the Lore Lindu National Park. The artifacts are of several shapes including statuary, enormous mostly-solid cylinders, and flattened stones with cup-marks. All of the statuary forms – ranging in height from 2 feet to more than 15 feet - are minimalistic depictions of anthropomorphic and zoomorphic figures. None of the statues have legs, most have large and strangely shaped heads, and some have large genitalia or abstract geometric ornamentation. The sculptural style of the figures are completely unique in the world, with the closest resemblance being the equally enigmatic carvings found at San Augustin in Colombia. No mythological, anthropological, archaeological, ethnological or historical research has provided any insight into the age, provenance or purpose of these statues.

Equally mysterious are the enormous, mostly solid cylinders, locally called kalambas, which are also found throughout the three valleys. These kalambas, ranging in height from 5 to 10 feet and weighing multiple hundred pounds, are each carved from individual blocks of stone and some, but not all, are accompanied with stone lids. Approximately 50-90% of the mass of each kalamba is solid stone, with the upper end being hollowed out, also in a cylindrical manner. Some of the hollowed out sections have a single level, while others have two levels separated by a ridge. The difference in depth between the two levels is normally no more than 2 inches. Some of the kalambas have rings or zoomorphic and anthropomorphic designs carved on their sides; this is also true on some of the lids. It has been postulated that the cylinders, and the flattened cup-marked stones, may have been used for some sort of mineral separation process, and granular gold is found in high concentrations in the surrounding areas. The cylinders would not have been functional for bathing or burial due to their limited interior size and depth.

What were these strange, near-solid, massive stone cylinders used for? Where, when and how were they quarried? How were they transported from their unknown quarry sites to the thickly forested mountains and valleys of Central Sulawesi. Who (or what) did all this, and why? The answers to these questions are unknown, the mystery unsolved.

But is there another avenue of exploration we may conduct to explain this mystery? Yes, let us look away from the earth and to the stars. While most university trained archaeologists will scoff at this idea, might it be possible that the Sulawesi megaliths had an extraterrestrial origin? Surely this can be considered. Given the facts that these megaliths are absolutely unique in the world, that their age, source of stone, style of ornamentation, method of transportation and function is entirely unknown, perhaps some off-planet explanation is a possibility. Perhaps the enigmatic beings depicted on the stone statues were not human beings but, instead, were scientists or miners from another world in search of gold. 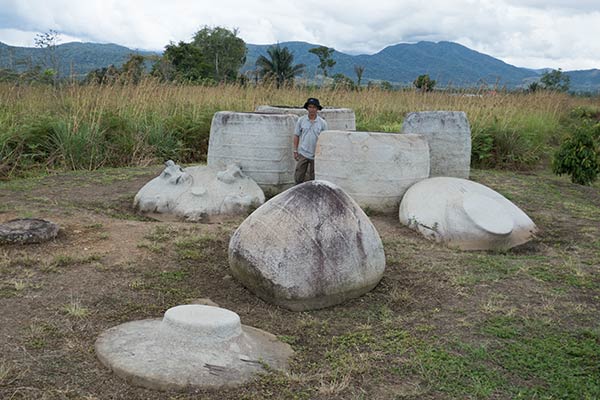 For additional information and assistance with travel to the remote megalithic sites of Sulawesi Island, contact archaeologist Iksam Djorimi by email at  This email address is being protected from spambots. You need JavaScript enabled to view it. or by phone at 081341206686 or 082291226345.