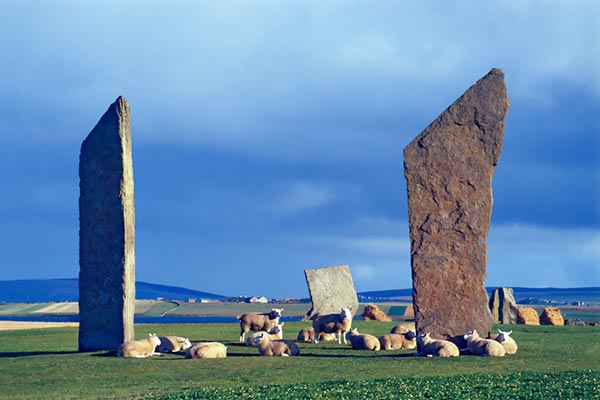 
The Stones of Stenness were originally a ring of twelve but now only four remain standing. It is believed that the ring was erected sometime during the 3rd millennium BC. While bicycling across the island of Orkney, I twice passed by the Stones of Stenness early in the morning and on both occasions noticed a group of sheep sitting in the middle of the circle. There was no fence keeping the sheep within the circle, they only moved from the circle when humans entered, and they soon returned to the center when the humans departed.

In consideration of this scene one is reminded of various examples of animals' keen sensitivity to the power of place, such as salmon fish swimming hundreds of miles up torrential rivers to return to the exact location of their spawning grounds, and species of birds that migrate across entire continents yet still return to their original roosting trees. What is to account for these phenomena? In the case of the sheep being repeatedly attracted to the center of the stone ring, it is reasonable to assume that they sense some sort of energy field in the circle that is pleasant for them to experience in the same way a common house pet will repeatedly return to the thermal energy of a warm fire-place or a sunlit window on a cold winter day.

This matter of energy fields existing within the stone rings has been studied by a multi-disciplinary team of researchers in England. Called the Dragon Project, in reference to the ancient Chinese Feng Shui symbol for a current of earth energy, the project was begun in 1977 and was staffed by experts in archaeology, geology, physics, chemistry, and electronics, as well as several highly skilled practitioners of the old art of dowsing. The project was initiated and managed by Paul Devereux, an English scholar who has written widely and insightfully on sacred sites, shamanism, ley-lines and the so-called field of 'earth mysteries'. Devereux's 1990 book, Places of Power, presents a thorough discussion of the current state of knowledge regarding the subject of monitorable energies at sacred sites.

Based on a study of over thirty locations in England, the project determined that within the perimeter of various stone rings and other types of ancient sites, as opposed to outside the sites, there were measurable "anomalies in radiation, magnetism, apparent ultrasound, radio propagation, infra-red photography, and other areas". Devereux writes:

"There is nothing paranormal about these forces, but we are looking at them in a context not studied by orthodox science, and it is that context that is important and that holds the promise of revealing what may have been a prehistoric knowledge and usage of the effects of natural energies.....Natural radiation has always existed throughout the universe; it is part of the network of forces that sustain it. Natural radiation is not different from artificially produced radiation except in terms of its source and the concentrations in which it occurs.....Perhaps homeopathic doses of radiation could have curative effects.....If certain levels of, or exposure to, natural radiation can stimulate healing in certain types of disorder, healing traditions connected with particular standing stones could perhaps be explained. For instance, the Men-an-tol, where a sick child was passed a number of times through the stone's hole, happens to have a radiation level around the inside edges of the hole about double that of the environment.....As far as magnetic stones at sites are concerned, I suspect that they were employed for both healing work and as another geophysical means of augmenting altered states of consciousness. Modern medicine uses pulsed low-frequency magnetic fields to treat bone fractures (and folklore tells us that us that bone disorders were one of the chief ailments brought to the stones for treatment)." 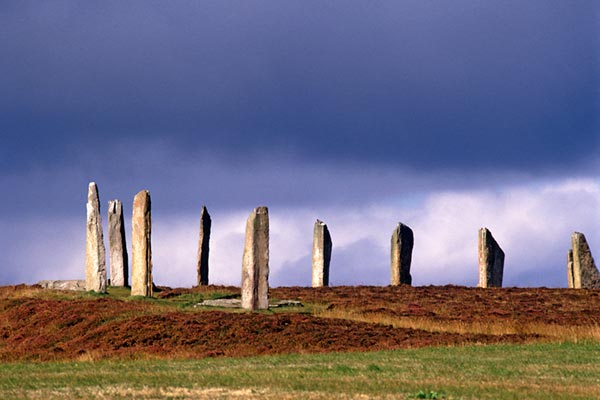