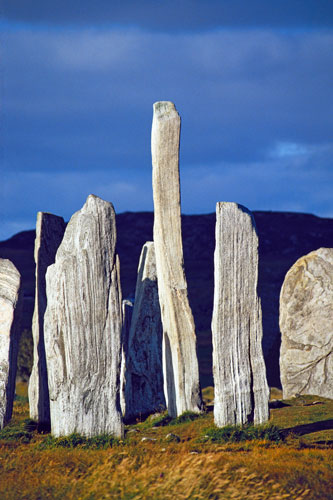 
A local legend relates how the stone ring of Callanish was found many hundreds of years ago by a farmer looking for large rocks to build a wall. Wandering across the desolate wind-swept moors of the Isle of Lewis, the farmer came upon a single large stone jutting from the ground. With the intention of removing the stone, the farmer began to dig for its base. As he dug deeper into the earth, other stones began to appear until finally he had brought to light the ancient ring of Callanish. Whether or not this popular legend is true, we do know that the stones of Callanish were indeed slowly covered by peat moss during the many thousands of years since the site was abandoned.

Archaeological excavation at the site has determined a construction period as early as 3400 BC and paleoclimatology studies have shown that ring's use as an astronomical observation device may have ended sometime around 1500 BC. About this time the weather in much of northern Europe cooled, the previously clear skies clouded over, and consistent astronomical observations thereby became impossible. The site of Callanish was abandoned and the slow-growing peat moss relentlessly inched up and over the standing stones.

While the stones shown in the photograph are the most prominent and visually striking objects in the area, they are only one part of a large cluster of some twenty megalithic ruins within a two mile radius. The ring itself seems to have originally been set at the center of a cross shaped arrangement of standing stones approached by an avenue of stones 270 feet long, of which only nine remain standing. As it now exists the ring is composed of thirteen stones, the tallest being 15.5 feet tall (4.72 meters) and weighing 5 - 6 tons. Recent astronomical surveys conducted at the ring have suggested various alignments of the stones including an orientation with the Pleiades in 1330 BC, Capella in 1720 BC, and Altair in 1800 BC. While there is no scientific agreement concerning these orientations, it is generally believed that Callanish functioned as an astronomical calendar associated with the moon and that it accurately marked the 18.61 year cycle of maximum lunar declination.

According to this author's interpretations, the ring of Callanish, like many other similar structures in Europe, had both an astronomical observation function and a sacred temple function. The stones were used as sighting devices to track the rising and falling of celestial bodies in order to predict in advance of their occurrence particular periods in the cycles of those bodies. During those periods the stones in the center of the ring became the focus of ceremonial actions. In support of this idea it is noteworthy to mention that the gneiss rock of which the ring is constructed is thickly embedded with a variety of crystal types including white quartz, feldspar and hornblende. Furthermore it has been found by the sacred site energy-monitoring studies of Paul Devereux's Dragon Project, that during the solstice period the radiation readings at Callanish doubled in intensity. Exactly how and why the prehistoric builders used the rings we may never know, yet a hint is perhaps offered by an old legend which states Callanish to be an auspicious place to consummate a marriage (for places with similar legends, see photos and text of Paestum, Italy and Cerne Abas, England). 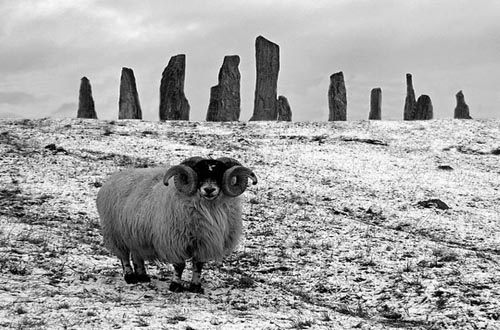