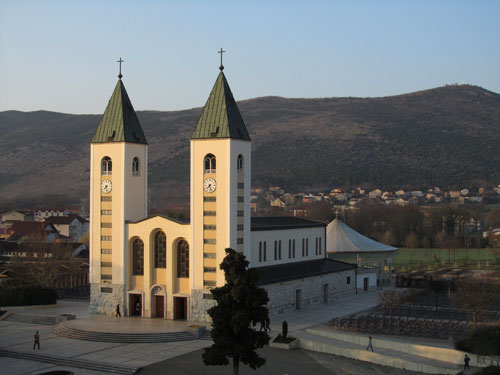 
Medjugorje is a town located in western Bosnia around 25 kilometers southwest of Mostar. Medjugorje has become famous as a pilgrimage site due to a series of apparitions of the Virgin Mary to six local Catholics that began on June 24, 1981 and have continued for three of the six visionaries ever since then. The messages given to the visionaries by “Our Lady of Medjugorje, the Queen of Peace” have stressed the importance of faith, prayer, fasting and conversion as a way of attaining both individual and world peace. In addition to these messages, each of the six visionaries was given a total of ten “secrets” regarding events that will occur on the earth in the near future. Some of the secrets pertain to the whole world, while others are of concern only to the visionaries themselves or to the village of Medjugorje. Thus far the visionaries have revealed only one of the secrets.

The Roman Catholic Church has declared that it cannot be affirmed that the reported apparitions are supernatural in character. On March 17, 2010, the Vatican announced it was beginning a formal investigation of the apparitions at Medjugorje. One leading bishop, Ratko Peric, has strongly refuted the truth of the apparitions and his reasons may be read in Medjugorje After Twenty-One Years.

Apparition Hill, a few hundred meters above the hamlet of Podbrdo, is the site of the first apparitions of Our Lady of Medjugorje. The town of Medjugorje has become Europe's third most visited pilgrimage site, after the other Marian shrines of Lourdes in France and Fatima in Portugal. In excess of one million people visit each year and it has been estimated that 40 million pilgrims have come to the shrine since the reputed apparitions began in 1981. Important festival periods are June 25, the Anniversary of Our Lady's apparitions, and July 25, the Feast of St. James, the Patron Saint of Pilgrimage. 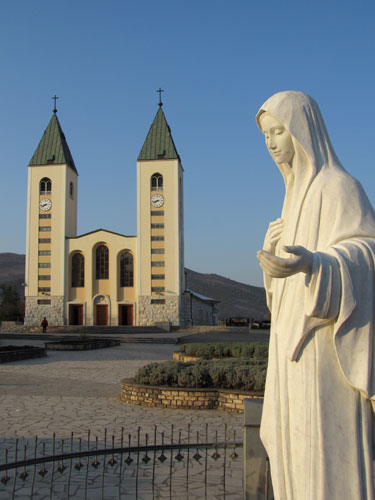 Details of the apparitions.

On the first day, June 24, at approximately six o' clock in the evening, on the area of Crnica hill known as Podbrdo, six children (Ivanka Ivanković, Mirjana Dragićević, Vicka Ivanković, Ivan Dragićević, Ivan Ivanković and Milka Pavlović) saw an apparition of a young woman with a small child in her arms. She did not say anything to them but indicated with gestures that they should come closer. Surprised and afraid to come near, the children fled.

On the second day, June 25, in hopes of seeing her again, the children met at the place where the woman had previously appeared. Following a flash of light she appeared again, this time without the child. The children fell to their knees and began to pray. After their prayer the apparition began to speak with the children and Mirjana asked for some sign to be given so that the local people would not think they were crazy or lying. The children also asked the woman if they would see her the following day and she replied by nodding her head.

On the third day, June 26, the woman appeared again and this time indicated that she was the Virgin Mary.

On the fourth day, June 27, the Virgin Mary appeared several times to the children and answered questions they asked of her. She also indicated she would return the following day.

On the fifth day, June 28, people had begun to gather at the apparition site early in the morning and by noon there was a crowd of more than fifteen thousand. The Virgin Mary appeared again at the usual time, spoke with the children and said she would return the following day.

On the sixth day, June 29, the children were taken in the morning to the nearby town of Mostar for a medical examination, after which they were proclaimed healthy and sane. That evening the crowd of people on Apparition Hill was even larger than the previous day. As soon as the children arrived at the usual place and began to pray, the Virgin Mary appeared. On that occasion Mary told the children to have faith saying, "The people should believe firmly and have no fear."

On the seventh day, June 30, the six children experienced the apparition not on Podbrdo hill but more than a kilometer away. Soon after this the police began to hinder the children and pilgrims from going to Podbrdo Hill, the site of the apparitions. But the Virgin Mary continued to appear to them in secret places, in their homes and in the fields. The events continued in this fashion up until the 15th of January 1982, when the children saw Our Lady in a closed off area of the Parish Church, and from April 1985 onwards in a room in the Parish house. All this time, from the beginning of the apparitions up until the current day, there have only been five days when none of the children saw Our Lady.

Our Lady did not always appear in the same place, nor did her apparitions always last a specified period. Sometimes the apparitions lasted only a few minutes, other times an hour. Neither did she always appear at the children's call. And sometimes she appeared to one of the children and not to the others. If she hadn't promised an appointed time, nobody knew when she would appear, or if she would appear at all. 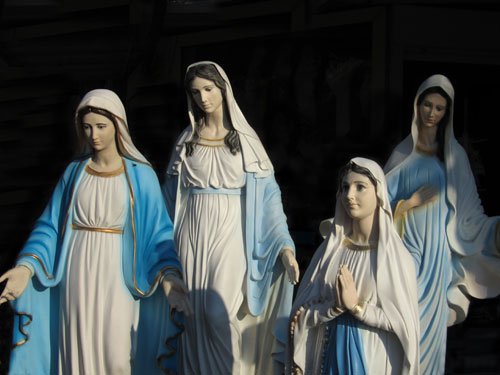 According to Bishop Ratko Perić, “The numerous messages of Medjugorje, ascribed to the Madonna are complete invention. If our faith is considered rational service to God, true and healthy spiritual worship, as it rightfully is, then it cannot be any person's private fantasy or illusion. The Church is competent to say this. In the Church’s name, 30 chosen priests and physicians, working together in three Commissions for 10 years, in more than 30 meetings, dutifully and expertly investigated the events of Medjugorje and brought forth their results of study. And not one, but twenty bishops responsibly declared that there exists no proof that the events in Medjugorje concern supernatural apparitions or revelations.”

This is an interesting matter, whether the apparitions as reported by the six children did actually occur. Whatever the truth, the fact that a great pilgrimage to the site of Medjugorje has developed is important to consider. It is prudent to sometimes distrust religious institutions, both their claims and their intentions. Merely because a religious official, or group of officials, says something is true certainly does not automatically make it so. Yet, what cannot be denied is the spiritual inspiration of each of the millions of pilgrims who have journeyed to the shrine of Medjugorje. They have come with a belief that divinity manifested in form at a particular place and that by being in that place themselves they may somehow partake of that divinity too.