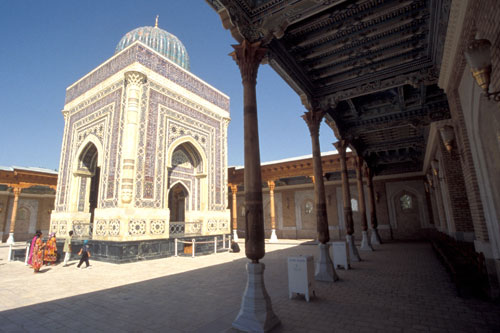 Twelve kilometers north of Samarkand stands the recently renovated shrine complex of the 9thcentury Islamic saint Muhammad Ibn Ismail al-Bukhari. Born in Bukhara in 810 AD, he made a pilgrimage to Mecca as a teenage boy, spent 12 years living there and then traveled widely throughout the Muslim world collecting Hadith, these being the traditional sayings of the Prophet Muhammad. Nearly 3000 of these were compiled into a book known as Al-Jami al-sahih, which is considered by many Sunni Muslims to be the most authoritative collection of Hadith and a religious book second only to the Koran. Al-Bukhari died in 870 and his tomb became a celebrated place of pilgrimage for Muslims from throughout Central Asia. 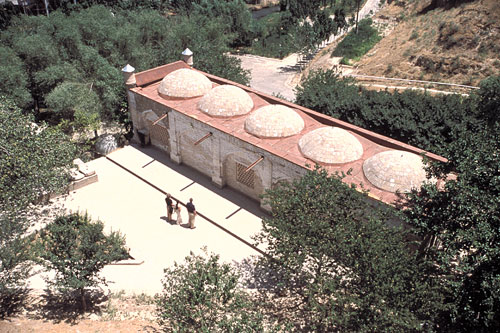 Situated on the outskirts of dusty Samarkand, among rolling hills and bordered by a quiet stream, the Tomb of the Prophet Daniel is a much-visited holy place for Islamic, Christian and Jewish pilgrims. Known locally as the Mausoleum of Khodja Daniar, the crypt is believed to contain the arm of Prophet Daniel. According to local legends, this ancient relic was brought to Samarkand by the warrior king Tamerlane after he stole it from Mecca. The length of the crypt, being over 18 meters long and far larger than is necessary for a simple arm bone, is explained by a curious legend stating that the arm bone miraculously grows larger with each passing year. 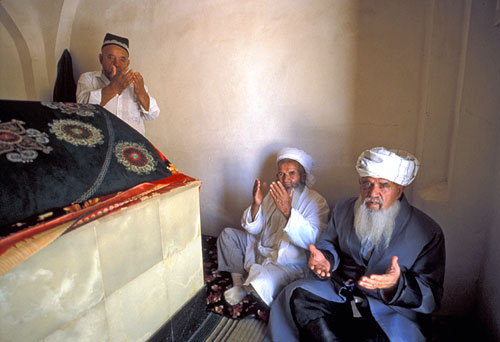 Sufis at the shrine of Prophet Daniel, Samarkand

Another important pilgrimage site in Samarkand is Shahr-i-Zindar, a mausoleum complex dating from the 7thcentury. Shahr-i-Zindar stands for 'The Living King' and refers to the grave of Qusam ibn-Abbas, a cousin of the Prophet Mohammed, who is said to have first introduced Islam to Central Asia in 676. Under the Abbasids his tomb was venerated and the legend developed that he did not die but was miraculously engulfed in a cliff, hence the name 'The Living King'. According to the great Islamic traveler Ibn Battuta, the shrine was so famous that it was not destroyed during the Mongol invasions. Today the shrine is in a much-dilapidated condition but is still visited by many hundreds of pilgrims each day. Other nearby tombs, dating mostly to the 14thand 15th centuries, belong to the family and friends of Tamerlane and Ulugh Beg. In the Samarkand region there are two other pilgrimage shrines called Khodja Abdi Darun and Chupan Ata.