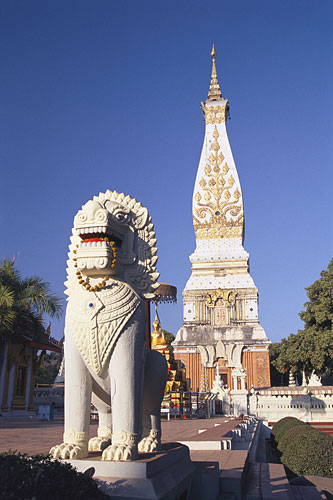 
In northeastern Thailand, a kilometer from the shores of the vast Mekong River stands the exotic temple complex of That Phanom on the sacred hill of Phu Kamphra. According to the earliest known legends, the original sanctity of this site derived from visits by Kakusandha, Konagamana, and Kassapa, the Buddhas of the three previous ages. Long after these mythical visits the Buddha of our current age made a pilgrimage to the sacred hill to venerate the relics of the earlier Buddhas. Accompanied by his chief disciple, Ananda, the Buddha journeyed east from India to Phu Kamphra (legends say he actually flew) visiting other sacred places along the way. While at the sacred hill the Buddha telepathically communicated with another disciple, giving him instructions that following his death the disciple should bring the Buddha's breastbone relic to the hill. Legends say that this relic was later brought to That Phanom and that a reliquary was established to protect and enshrine it. In the Theravada Buddhist traditions of Sri Lanka, Burma and Thailand it is commonly thought that the Buddha, shortly before his demise, made an extended journey throughout the region of Southeast Asia to visit sacred sites of earlier Buddhas and also to lend support to the emerging Buddhist monastic tradition. No historical evidence, however, confirms that such a journey ever took place. Scholarly interpretation of the legend suggests that it was a method the Theravada sect used to mark and sanctify Buddhist territory.

A collection of stories known as the That Phanom Shrine Chronicles tell that the first shrine was built shortly after the Buddha's demise. Archaeologists, however, date the earliest structures to between the sixth and tenth centuries AD, with the present form of the temple being established by the Lao kings of Vientiane in the fifteenth or sixteenth century. The centerpiece of the temple is a 57 meter tall That, or Lao style Chedi, decorated with 110 kilograms of gold. The Chedi is known as a popular ‘wish-fulfilling place’ and has a curious ritual whose origins are lost in time. Pilgrims will first purchase a small bird held captive in a finely woven bamboo cage. Carrying the caged bird with them while walking round the temple, the pilgrims will pray at various Buddha images and pre-Buddhist spirit-stones. This period of prayer may last from five minutes to more than an hour. Finally, the bird is freed to the skies in the hopes that its release will speed the pilgrim’s prayers to heaven. While pilgrims visit the shrine of That Phanom throughout the year, during the seven-day period of the annual festival held in late January or early February the temple complex is alive with the energy of many thousands.

The Lak Muang spirit-stone is a pre-Buddhist artifact denoting the center of a place of geomantic importance. It is interesting to compare this ancient Southeast Asian practice of marking power places with a standing stone to the identical traditions found in many other regions of the world. Inspecting the carvings on the stone, we find an iconographic representation depicting a serpent or a dragon; this being an archaic symbol of the Earth spirit, which appears mysteriously and universally at sacred places all across the planet.

That Phanom is also considered an important sacred site because of its listing among the twelve pilgrimage centers of the twelve-year animal cycle. This calendar system, known in Thai as naksat pi, is based on a duodenary cycle of years, each year being associated with a particular animal. The naksat pi system has been in use among the northern Thai since at least the thirteenth century, when they emerged as the dominant people of the area, yet most likely it dates from a much earlier period. In the Yuan tradition of Theravada Buddhism in northern Thailand, it is considered beneficial for a person to make a pilgrimage to that shrine which corresponds to the year of his or her birth. It is usual for the pilgrimage to be taken on the birth date of the person and particularly on the anniversary of the same year of the twelve-year cycle in which they were born (for example, their thirty-sixth or forty-eighth birthday). While at the shrine the pilgrim will utilize the services of a Buddhist monk to conduct the sup chata ritual which is believed to strengthen the pilgrim’s khwan or vital force, ensure their long life, gain merit, and attract the blessings of various pre-Buddhist and Buddhist spirits. These twelve shrines are also considered highly sacred because of their association with the life of the Buddha. According to legendary sources, seven of the shrines were visited by the Buddha, four were not visited by the Buddha but contain his relics, and the fifth, mysteriously, is in heaven. Historically, it is known that a number of these shrines are connected in legend with pre-Buddhist kingdoms and were therefore recognized as sacred places long before they became associated with the life of the Buddha. The names, locations and associated animals of each shrine are listed below: 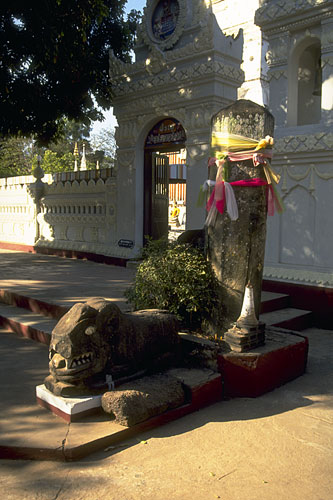