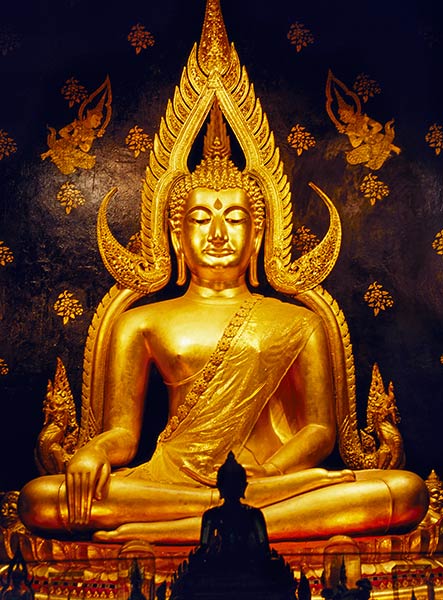 Buddhist sacred places may be described in three broad categories; those places directly connected with the life of the historical Buddha, those places where relics of the Buddha are kept, and those places with highly venerated Buddha images. The temple of Wat Phra Si Ratana Mahathat in Phitsamulok, Thailand is in the third category. Its stunningly beautiful image of Buddha is venerated not only in Thailand but also throughout all of Southeast Asia. Locals often shorten the long name of the temple, simply calling it Wat Phra Si or Wat Yai. The bronze image of the seated Buddha is a superb example of late Sukhothai sculpture and was cast during the reign of King Li Thai in 1357. While a bustling, noisy city has grown up around the temple and streams of pilgrims and tourists constantly pass through the shrine, there is none-the-less a palpable feeling of serenity that surrounds the Buddha image. The best times to visit are early morning and late afternoon; then you may sit to meditate in front of the Buddha and will often have the shrine all to yourself.