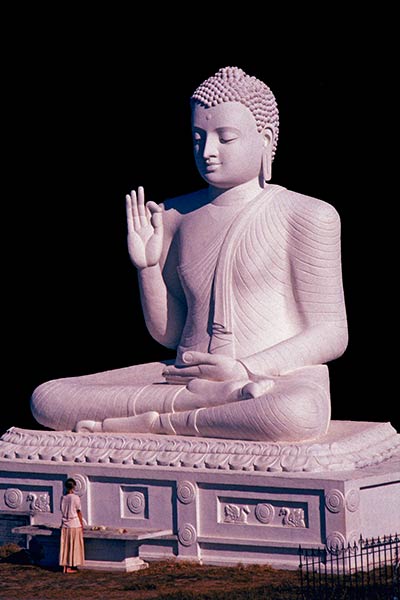 Situated 12 kilometers east of the ruins of the great city of Anuradhapura, the sacred mountain of Mihintale is considered the location where Buddhism was first introduced to the island of Sri Lanka. There are two stories, one historical and one mythological, that explain the arrival of Buddhism at Mihintale. According to historical sources, in the middle of the third century BC the great Indian Emperor Ashoka had sent his son Mahinda to Sri Lanka to spread the teachings of the Buddha. Mahinda and his group of Buddhist monks were camped upon the sides of Mt Mihintale when King Devanampiya Tissa of Anuradhapura encountered them during a royal hunting expedition. Mahinda spoke to the king of Buddhism and recited the Culahastipadopama and other sutras. The date of this meeting between King Devanampiya Tissa and the Buddhist monk is believed to have been on the full moon of June in the year 247 BC. Soon thereafter the king (and 40,000 inhabitants of Anuradhapura) converted to Buddhism. An alternate story of the arrival of Buddhism in Sri Lanka tells that the Buddha himself journeyed to the island, on the back of the great winged demigod Garuda, but there is no historical evidence that the Buddha himself ever visited the island. Today the peak of Mihintale, approached by a grand stairway of 1840 granite steps, has many temples, lodgings for monks and several splendid statues of the Buddha. Each June on the full moon there is a pilgrimage commemorating the date when Mahinda first preached the Buddhist doctrine in Sri Lanka and many thousands of pilgrims flock from all over Sri Lanka to meditate on the holy peak. The photograph was made with a Nikon F3, a 300mm lens (with two 2x teleconverters resulting in a 1200mm lens) and Fujichrome 50 film. The photograph was made during the brightest part of the day but was underexposed by several f-stops in order to turn the background to dark black and thereby simulate the view of the great Buddha as seen during the night of the full moon pilgrimage.