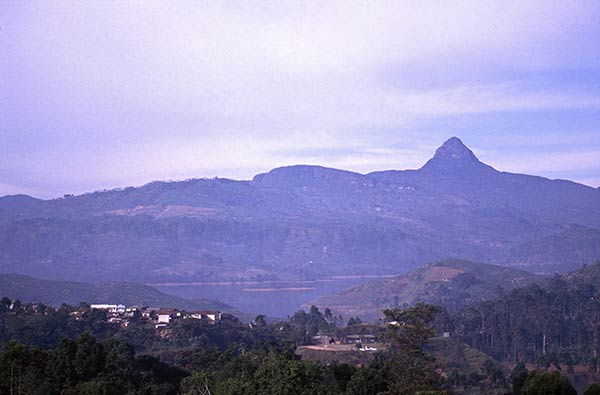 
Jutting sharply skyward from the lush jungles of southwestern Sri Lanka is the 7362 foot (2243 meter) peak of Sri Pada, the 'Holy Footprint'. Also called Adam's Peak, the mountain has the unique distinction of being sacred to the followers of four of the world's major religions: Hinduism, Buddhism, Christianity and Islam. Long before the development of these religions, however, the mountain was worshipped by the aboriginal inhabitants of Sri Lanka, the Veddas. Their name for the peak was Samanala Kanda; Saman being one of the four guardian deities of the island. For Hindus, the name of the mountain is Sivan Adi Padham, because it was the world-creative dance of the god Shiva that left the giant footprint (5 feet 7 inches by 2 feet 6 inches). According to Buddhist traditions from as early as 300 BC, the real print is actually beneath this larger marking. Imprinted on a huge sapphire, it was left by the Buddha during the third and final of his legendary visits to Sri Lanka. When Portuguese Christians came to the island in the 16th century they claimed the impression to be the footprint of St. Thomas who, according to legend, first brought Christianity to Sri Lanka. And finally, the Arabs record it as being the solitary footprint of Adam where he stood for a thousand years of penance on one foot. An Arab tradition tells that when Adam was expelled from heaven, God put him on the peak to make the shock less terrible - Ceylon being that place on earth closest to and most like heaven.

The mountain is more easily seen from the sea than from land, and also more impressive. Early Arab seafarers fascinated with the pyramidal peak wrote of it as "the highest mountain in the world" (it is not even the highest in Sri Lanka), and "visible from three days sail". The ancient Sinhalese also believed it to be of great height and a native legend tells "from Seyllan to Paradise is forty miles, and the sound of the fountains of Paradise is heard here". Visited by many early world travelers, among them the Arab Ibn Batuta (1304-1368) and the Venetian Marco Polo (1254-1324), Adam's Peak attained a legendary status as a mystic pilgrimage destination. Today the pilgrimage season commences in December and continues until the beginning of the monsoon rains in April (from May to October the mountain is obscurred by clouds). Certain parts of the path leading up the mountain are extremely steep and the climbing chains secured in these sections are said to have been placed by Alexander the Great (365-323 BC), though there is no evidence that he made it this far south on his Asia travels. Atop the peak is an oblong platform (74 x 24 feet) where stands a small Buddhist temple and the shrine of Saman with the strange footprint. Votive offerings are made here, especially of a coil of silver as long as the donor is tall, for recovery from sickness; and rain-water taken from the footprint is known to have a wonderful healing power. Adam's Peak is also called Samanalakande or the 'butterfly mountain' because of the myriads of small butterflies that fly from all over the island to die upon the sacred mountain. 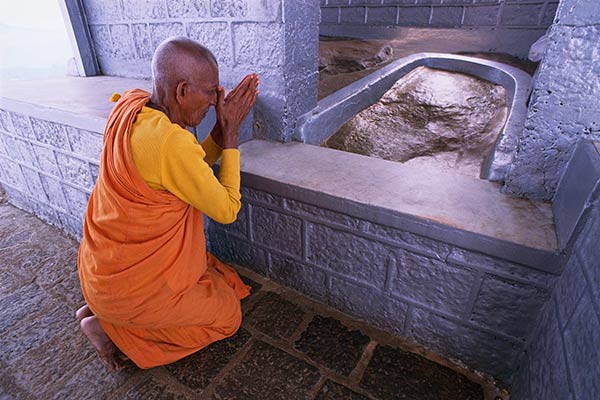