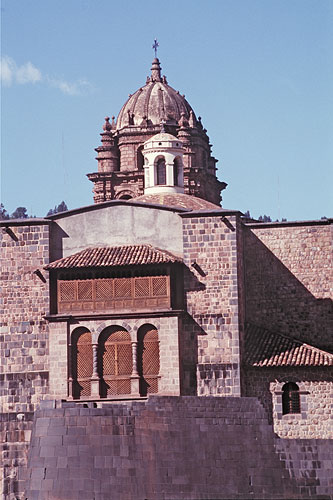 Church of Santo Domingo on foundations
of Inca Coricancha temple


One of the oldest continuously inhabited cities in the western hemisphere, Cuzco was the political and religious capital of the Inca Empire of Tawantinsuyu, meaning ‘Four Quarters of the Earth’. The original Quechua name of the city was Qosqo, meaning ‘navel’ or ‘center’ but the early Spanish conquerors changed the name to Cuzco meaning a hypocrite, humpback or small dog. In 1990 the local government voted to reinstate the original name. Situated at an elevation of 11,150 feet, Cuzco was laid out on a grid plan in the shape of a puma, a sacred mountain lion. The pre-Inca site of Sacsayhuaman, on a plateau near the northern edge of the city, forms the head of the puma and the Coricancha temple forms the center of the grid.

The Coricancha (sometimes spelled Qoricancha) was the centerpiece of a vast astronomical observatory and calendrical device for precisely calculating precessional movement. The Inca took over an earlier sacred site at the center of the city, upon which they constructed their primary temple and astronomical observatory. Emanating from the temple were forty lines (some sources say 42) called seques, running arrow-straight for hundreds of miles and pointing in the direction of significant celestial points on the horizon. Between 328 and 365 huacas or shrines were situated along these ceques. Four of the ceques represented the four intercardinal roads to the four quarters of Tawantinsuyu, others pointed to the equinox and solstice points, and still others to the heliacal rise positions of different stars and constellations highly important to the Inca. The Inca also used the Coricancha in conjunction with standing stones called sucancas positioned on the horizon of nearby mountains for determining the dates of the solstices and equinoxes, as well as monitoring the passage of precessional time. The great temple also incorporates a prominent solar alignment using a nearby peak called Pachatusan as a sightline for the June solstice. The elliptical exterior wall of the temple may have served as a model of the celestial ecliptic.

The Coricancha temple (meaning literally, "the corral of gold") was primarily dedicated to Viracocha, the creator god, and Inti, the Sun god. The Coricancha also had subsidiary shrines to the Moon, Venus, the Pleiades and various weather deities. Additionally, there were a large number of religious icons of conquered peoples which had been brought to Cusco, partly in homage and partly as hostage. Reports by the first Spanish who entered Cuzco tell that over 4000 priests served the Coricancha, that ceremonies were conducted around the clock, and that the temple was fabulous beyond belief. The wonderfully carved granite walls of the temple were covered with more than 700 sheets of pure gold, weighing around two kilograms each; the spacious courtyard was filled with life-size sculptures of animals and a field of corn, all fashioned from pure gold; the floors of the temple were themselves covered in solid gold; and facing the rising sun was a massive golden image of the sun encrusted with emeralds and other precious stones. All of this golden artwork was quickly stolen and melted down by the Spanish conquistadors, led by Francisco Pizzaro, who then built a church of Santo Domingo on foundations of the temple. At the center of the Coricancha, marking a place known as Cuzco Cara Urumi (the ‘Uncovered Navel Stone’) is an octagonal stone coffer which at one time was covered with 55 kilograms of pure gold. Major earthquakes have severely damaged the church, but the Inca stone walls, built out of huge, tightly-interlocking blocks of stone, still stand as a testimony to their superb architectural skills and sophisticated stone masonry.

Read more about the Incan Empire.