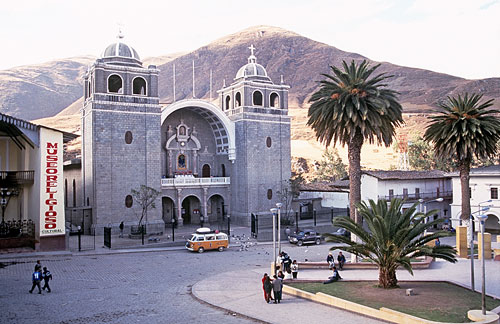 
The primary Christian pilgrimage places of Northern Peru are in the towns of Ayabaca, Otuzco, and Motupe. Ayabaca has a much venerated image of Christ; Otuzco is the site of a Marian apparition; and Motupe has the miraculous cross of Chalpon in a small cave far up a remote valley. Each of these sites reveal significant pagan influences and few non-Peruvians venture into these remote mountain regions.

Otuzco, a small town situated at 8600 feet above sea level, has one of the most celebrated pilgrimage festivals in the country. The festival, the Fiesta de la Virgen de la Puerta, takes place each year on December 15. At that time the normally quiet town hosts many thousands of pilgrims who travel there from throughout Peru and Ecuador. When I visited Otuzco, months before its pilgrimage fair, only local folk were around. Boisterous children played makeshift soccer in front of the church, young lovers kissed in the gardens, and old men fell asleep while praying in the sanctuary. There is an odd sort of museum next door to the church. A few dozen large glass cases display hundreds of skillfully crafted gowns, these being part of the large wardrobe used to dress the five foot tall statue of Mary. The gowns were donated by pilgrims as visible expressions of prayers or thanks for prayers that have been answered. In other glass cases surrounding the ornate gowns were thousands of pieces of jewelry donated by the pilgrims for the further adornment of the miracle-causing statue. The sanctuary of Otuzco is known to be a healing place, its power considered especially beneficial for young children.

The small town of Motupe, located 49 miles (79 kilometers) north of Chiclayo in the Lambayeque region of Peru, is famous for its cave shrine of the Cruz de Chalpon (the Cross of Chalpon). Throughout the year many thousands of pilgrims visit the shrine, which is located in the mountains above the town.

The tradition of the Cross of Chalpon began in 1850 when a hermit priest named Padre Juan lived in an isolated area of the mountains near Motupe. During his time in the mountains, Padre Juan lived in different caves and carved large wooden crosses, which he used in his worship. On occasion he came to the town of Motupe, where he was much respected by the local peasants. Later in his life Padre Juan moved away, became ill and finally passed away in Lima. His corpse, which according to legend appeared in different places, was sent to Rome and he was eventually canonized.

For some years the location of the cave where Padre Juan had lived and worshipped was lost. In 1868 a cataclysm was predicted and the villagers of Motupe began to search for it in hopes of obtaining protection. On August 15 Jose Mercedes Anteparra found the cave and cross on Mt. Chalpon. The cross was carried to the village where the local peasants received it with great joy. After some time the cross was returned to the cave. Miracles began to occur when people viewed the cross and over time an ever-increasing number of pilgrims came to visit the cave.

Each year on August 5 there is a pilgrimage festival in which devotees carry the Cross of Chalpon from the cave to the village of Motupe. A large percentage of the pilgrims attending the festival walk barefoot from all over Peru. During the festival there are fireworks displays and exhibitions of holy icons. Food stalls are set up around the main plaza and along the pathway leading to the cave shrine. Open throughout the day, these stalls offer a selection of regional dishes, water and beer, as well as many items of religious nature such as figurines, candles and other mementos. The pilgrimage festival is a wonderful opportunity to view the mix of Indian and Christian customs incorporated in a local religious ceremony. 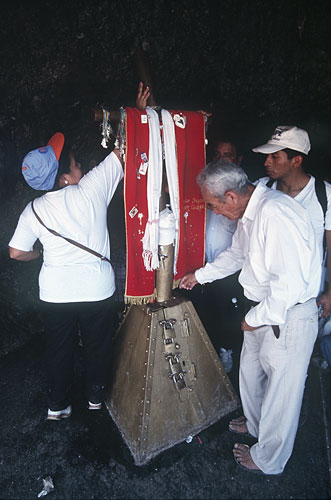 Pilgrims at Cross of Chalpon, Motupe