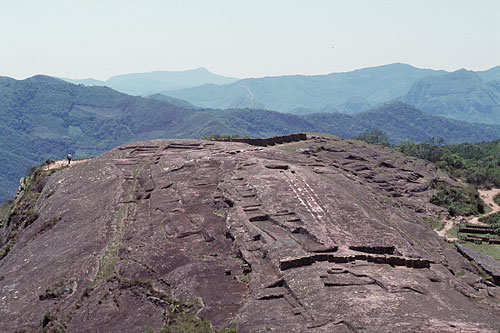 
Located in the remote mountains of central Bolivia, 120 kilometers from the town of Santa Cruz, the ruins of Samaipata are one of the most enigmatic ancient sites in all of South America. Perched at 6500 feet above sea level (1949 meters), the site was first discovered by the early Spanish and named ‘El Fuerte’ as it was believed to have military significance. Archaeologists no longer believe in the military use of the site but consider it to have had religious significance. The ruins of Samaipata consist of two parts: 1) the stone hill with many fascinating carvings of jaguars, snakes, other zoomorphic and geometrical figures, a water tank with conduits, and a curious seating arrangement, and 2) an area to the south of the stone hill that seems to have been the administrative and residential district. The seating arrangement at the top of the stone hill was designed with 12 seats carved into the hilltop facing toward each other in a circle. Within this circle of 12 seats is another set of three seats facing outward toward the 12 seats. These three seats are back-to-back, so that each seat faces 4 of the seats of the 12. 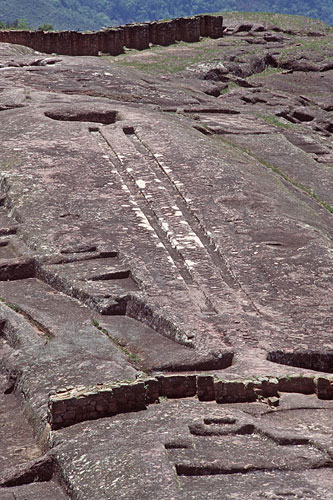