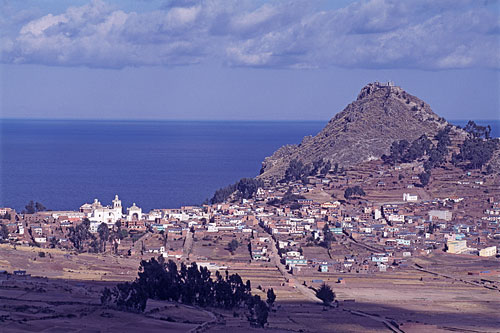 
Along the southern shores of Lake Titicaca, the town of Copacabana is most well known for its Christian pilgrimage shrine of the Virgen de la Candelaria, also called the ‘Dark Virgin.’ Before the Christian use of the site there was an Inca Temple of the Sun, from which native pilgrims sailed to the sacred islands of the Sun and the Moon. According to Christian legends, in 1576 some Inca fisherman were caught in a raging storm upon Lake Titicaca. While praying for divine assistance, Mary appeared and led them to safety. In gratitude they decided to build a simple shrine and install a statue of the Madonna. The native Inca craftsman, Tito Yupanqui sculpted the image, made of dark wood and approximately four feet tall, in 1576. Placed in a chapel in 1583, which was enlarged in 1619, the statue soon became famous throughout Bolivia and Peru as a miracle causing icon. The present cathedral, completed in 1805, is the most visited pilgrimage site in Bolivia and there are hugely attended festivals on the February 1-3, the saint’s day, May 23 (San Juan’s Day) and the first few days of August. The festival in August is extremely popular and Indian groups perform traditional dances accompanied by drums, flutes and pipes. During the festival periods a copy of the statue of Mary is adorned in colorful robes and precious jewels, and then take on processions around the town of Copacabana. The statue is also taken by boat into Lake Titicaca in order to bless the waters. The original statue is never taken outside because of fears that great storms may arise. Called ‘La Coyeta’ by Aymara and Quechua Indians, the Virgen de la Candelaria is Bolivia’s patron saint. Some people associate the name Copacabana with nightclubs or the famous beach of Brazil in Rio de Janeiro, but they derive their names from the Virgen of Copacabana who once saved some Brazilian fishermen from another violent storm on Lake Titicaca. 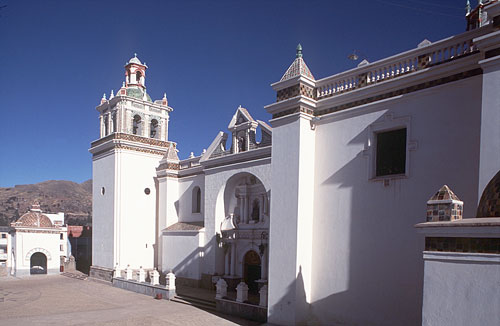 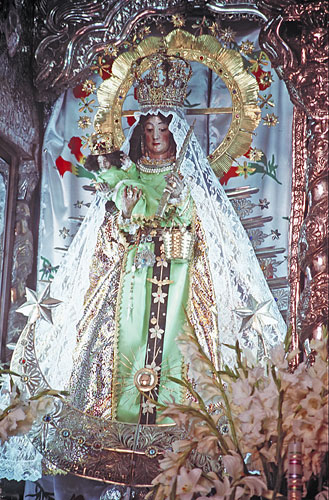