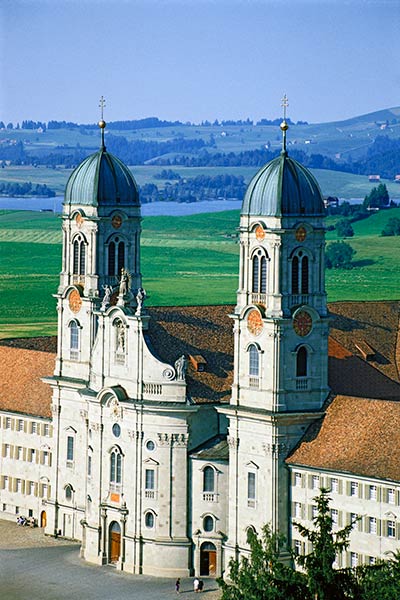 The Benedictine Abbey of Einsiedeln, Switzerland


In the German language the word einsiedler means hermit, and Switzerland's greatest pilgrimage shrine, the abbey of Einsiedeln, derives its name from being the 'place of the hermits'. While legends indicate the site was sacred in pre-Christian times, its historical fame began in the early 9th century. In 835, Meinrad, a young nobleman who had been a monk in the monastery of Reichenau, left the monastery to live a hermit's life in the deep woods of northeast Switzerland. For 26 years he lived alone in the woods with two crows as his only companions. In 861, two bandits came upon Meinrad in his hermitage and murdered him. Legends tell that Meinrad's two crows followed the bandits, hovering and shrieking in a strange manner, until the bandits were captured in Zurich, 30 miles away.

When Meinrad had first come to the forest he had brought along one of the mysterious Black Madonna statues, considered by many scholars to be Christianized pagan Dark Goddesses. After Meinrad's death a small Benedictine cloister was built at the site of his hermitage and this cloister, housing the Black Madonna, soon became a pilgrimage site of great importance. The enormous abbey standing today rose over a period of many centuries and only legends are left regarding the sites sacred use in prehistoric times. Inside the church the primary object of pilgrimage visitation is the Chapel of Grace which houses a mid-15th century Black Madonna icon (the earlier icon having been destroyed in a fire). The Chapel of Grace, standing directly upon the site of Meinrad's original hermitage, is believed to have been consecrated by Christ himself when he miraculously appeared on September 14, 948.

The Black Madonna images in European pilgrimage shrines are a matter of some controversy. Throughout Western Europe there are over 200 examples of these black images and, while anathema to the orthodox church, they are widely venerated as having esoteric, magical and wonder-working powers.

Writing in The Cult of the Black Virgin, Ean Begg states that

"The still popular cult of wonder-working images is not only reactionary and non-scriptural, it also evokes memories of awkward subjects best left in obscurity like the pre-Christian origins of much in Christianity, the history of the Templars, Catharism, and other heresies, and secrets concerning the Merovinginian dynasty. So, blackness in statues of the Virgin tends to be ignored and, where admitted, is attributed to the effects of candle smoke, burial, immersion or fashion's passing whim. The contention, then, of the Catholic Church is that most such statues were not originally intended to be black, and only became so by accident later." ...."If the presumed polychrome faces and hands of the Virgin and Child have been blackened by the elements however, why has their polychrome clothing not been similarly discolored? Secondly, why has a similar process not occurred in the case of other venerated images (where smoky candles were also burned nearby)?"

Mary Lee Nolan, a leading scholar of European pilgrimage has noted that more than 10% of the European shrines where Black Virgins are venerated are known to have been centers of worship in pre-Christian times. Echoing this fact, other scholars see in Black Virgin veneration a continuation of pre-Christian worship of such pagan goddesses as Isis, Diana of Ephesus, Artemis, Cybele, and the Celtic deity Hecate (it is interesting to note in this regard that the great Egyptian goddess, Isis, is often shown as a nursing mother with the infant Horus god at her breast; in this image lies the origins of the Madonna and Child image). Lending still more support to the pre-Christian origin of the Black Madonnas, Begg writes that

"Again and again in the stories of the Black Virgin, a statue is found in a forest or a bush, or discovered when ploughing animals refuse to pass a certain spot. The statue is taken to the parish church, only to return miraculously by night to her own place, where a chapel is then built in her honor. Almost invariably her cult is associated with natural phenomena, especially healing waters or striking geographical features. The Romans had taken over and adapted many of the sacred sites of the Celtic world, which the Christians were later, in their turn, to sanctify, but the spirit of the place remains Celtic, and still whispers something of its origins through the cult associated with it."

It is evident from a serious study of these matters that the patriarchal Roman church in its effort to exterminate the ancient and immensely popular goddess cults had only succeeded in driving them underground. In contemporary Europe the veneration of the feminine principle and her sacred sites is once again gaining power. As Begg interprets it,

"The return of the Black Virgin to the forefront of collective consciousness has coincided with the profound psychological need to reconcile sexuality and religion." 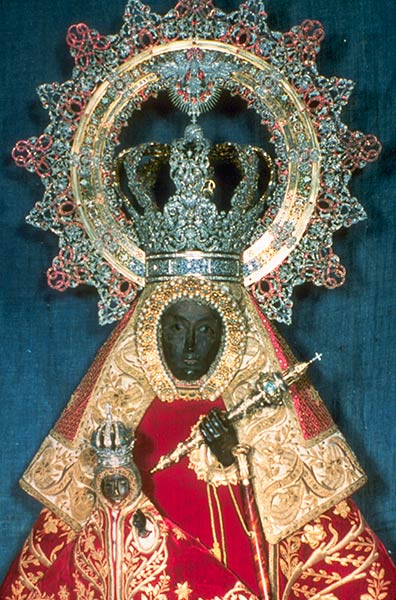