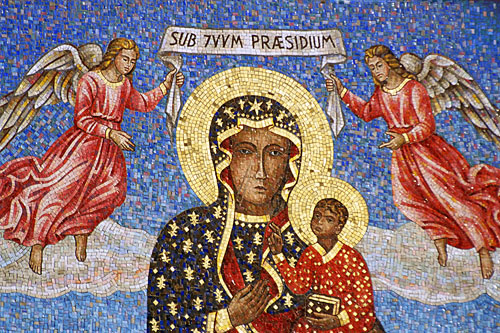 Located in the central region of southern Poland, the city of Czestochowa (pronounced 'Chen-sto-ho-vah') and its Marian shrine of Jasna Gora are the spiritual heart of Poland and the country's national shrine. Jasna Gorna is also a pilgrimage site of international importance. Attracting more than 4.5 million pilgrims a year from 80 countries it has a spiritual magnetism comparable to the other great Christian holy sites of Jerusalem, Rome, Lourdes, Fatima, Santiago and Guadalupe.

While archaeological excavations in the Czestochowa region have shown remains of human activity dating to the later Stone Age and the Bronze Age, the oldest historical accounts mentioning the existence of permanent forms of settlement in the area come from 1220. Rich in iron and limestone deposits, Czestochowa was then a small village on a trade route connecting Krakow and the western districts of Poland. The event that decisively influenced the fate of the town was the establishment of the Jasna Gorna monastery in 1382 by Prince Wladyslaw Opolczyk (Duke Ladislaus of Opole). The Prince brought monks of the Pauline order from the monastery of St. Lawrence in Hungary and a painted icon of the Madonna and Child.

This icon, imported from Russia and already the focus of cultic veneration, is shrouded in mystery. A painting on a wooden panel measuring 122 x 82 cm, the image has stylistic similarities to early Byzantine icons but it is not known when and where it was created. Legends say St. Luke the Evangelist was the painter (and he is also linked to the Madonna of Santiago) but scholars put its creation later, sometime between the 5th and 14th centuries with a provenance ranging from Byzantium and the Middle East to Italy and Hungary. The present appearance of the "Black Madonna" - as the icon is generally known - dates to the 15th century when the picture was damaged, repaired and repainted.

In 1430, the Jasna Gorna monastery was attacked and desecrated by Hussite raiders who damaged the icon. A 16th century Pauline monk, writing a history of the monastery, tells that, "One of the raiders approached in rage and flung the honourable painting against the floor so that the painting broke into three pieces, the head of the Blessed Virgin Mary remained whole, however. He was surprised by this miracle and called to his companions: Look how the painting broke into pieces, but the head and face remained whole. A more audacious one of them took out his sword and twice struck the face of the Virgin. Soon he went blind, as did another who attempted to do the same. On their return to the monastery, the monks found the painting destroyed and profaned, and they pieced it together and hid it with great reverence. Having heard of the arrival of King Ladislaus from Prussia to Krakow, they took the painting with them and complained to the King about the great cruelty. The king ordered that the painting be kept under guard in his castle. Then painters mended the honourable painting except for the scars (caused by the attacker's swords) which were not to be mended by any means. In this way the painting was restored to the monastery and it was brought back to its abode (in 1434) by a great multitude of lords, nobility and worthy burghers." As evidence of the extraordinary mastery of that repair, contemporary researchers are unable to pronounce definitively whether only the damages were repaired, or a copy of the original painting was made.

Commenting on the appearance of the icon and its effect upon viewers, Stefan Jan Rozej, a contemporary Polish writer, says, " For many generations the scars on St. Mary's face in the Icon of Jasna Gora have been an indispensable detail accompanying its religious and aesthetic perception. The scars are identified with the image and are an integral part of it. It seems that a particular sensitivity to them appeared during the Baroque period. The motif was frequently used in sermons to incite listeners to alter their attitudes in life and return to the path of repentance, or to invoke certain moods, move human hearts and minds. When the existence of the nation was in jeopardy, especially at the time of the Partitions, the scars were mentioned to awaken patriotic and nationalistic feelings. In the consciousness of many Poles the motif was linked ever more often with the invocation of Mary as the Queen of Poland. Following the loss of independence, from the outbreaks of national uprisings till the years of the German occupation, the motif of the scars appeared with increasing frequency in poetry and prose. It was employed to point out analogies with the suffering of the nation, could be applied to individual situations, and inspired hope and trust. This interpretation, which is constantly broadened, enriched and updated, can also be found in contemporary poetry because the Mother of God, who looks at us from the Icon of Jasna Gora, knows the mystery of the Cross and bears our wounds."

As protection against further raids, fortifications began to be constructed and between 1620 and 1648 an enormous defensive structure, surrounding the monastery buildings and church, was completed. These fortifications helped Jasna Gorna survive one of the most tragic events in its history, the siege of the Swedish army in November and December of 1655. For forty days, several hundred monks, mercenaries and local citizens led by monastery's abbot, Father Augustyn Kordecki, repulsed repeated assaults led by the 3000 Swedish troops. The retreat of the Swedes from Jasna Gorna had tremendous moral consequences; it raised the spirits of the Poles when they saw that the enemy was not invincible. The defense of Jasna Gorna, hallowed by legend, acquired a symbolic meaning and came to be regarded as a miracle worked by the Virgin and her icon. The heroic defense strengthened the Marian Cult, integrating the religious values of the Jasna Gorna shrine with Polish national ones, and making them the one comprehensive symbol of Polish patriotism. From this event and time, the monastery of Jasna Gorna and the miraculous icon became the most venerated pilgrimage site in the country.

The intensity of the pilgrimage movement was also increased by the privileges granted to Jasna Gorna sanctuary by the Papal authorities in Rome; especially the granting of indulgences to its Marian feasts. By the fifteenth century, Czestochowa was the most visited sacred site in all of central and Eastern Europe. On September 8, 1682, one hundred and forty thousand pilgrims participated in the ceremonies commemorating the three hundredth anniversary of the coming of the icon to Jasna Gorna. On September 8, 1717, more than two hundred thousand pilgrims attended the ceremony crowing Our Lady of Czestochowa as the Queen of Poland. The kings of the Jagiellonian and Waza dynasties as well as the elected kings all went on pilgrimage to Jasna Gorna.

While visited all year long, the most popular pilgrimage periods are the Marian Feasts, particularly the Birth of the Virgin on September 8 and the day of Assumption on August 15. Within the shrine, thousands of votives left by pilgrims over the centuries attest to the miraculous healing powers of the site, and this tradition also accounts for a large percentage of the visitors. Additionally, in recent years the shrine has gained even wider appeal because of its being the favored pilgrimage site of the Polish Pope, John Paul II.

Since the year 1717, a walking pilgrimage has set out each year for Jasna Gora from all the regions of Poland. More than two hundred thousand pilgrims arrive at the shrine in this way. In August of 1957, a copy of the Jasna Gorna icon began to be carried on a long pilgrimage around the country, visiting over the course of 23 years, all of the churches in Poland. Despite the difficulties created by the Communist authorities who imprisoned the copy of the icon from 1966 to 1972 when, instead of the image, an empty frame was carried around, the long pilgrimage was continued and completed at Czestochowa on October 1980.

Situated atop the 340 meter limestone hill of Jasna Gorna (meaning 'Bright Mountain') the great sanctuary, together with its extensive gardens, occupies an area of some 12 acres. The oldest part of the complex is the Chapel of Our Lady with its Gothic chancel and the altar of the miraculous icon. The basilica dates from the 15th and 17th centuries and the tower, rebuilt in 1906 after a fire swept the monastery in 1900, has the tallest spire in Poland at 106.3 meters. The entire monastery compound and surrounding fortifications have been designated a UNESCO World Heritage Site. 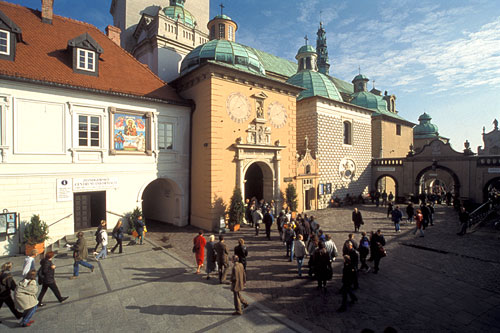 Entrance to the Basilica of Jasna Gorna, Czestochowa 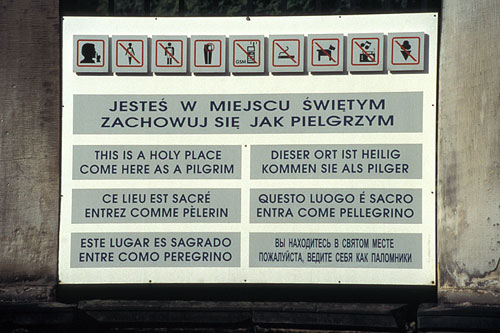 Sign at entrance to shrine of Jasna Gorna, Czestochowa 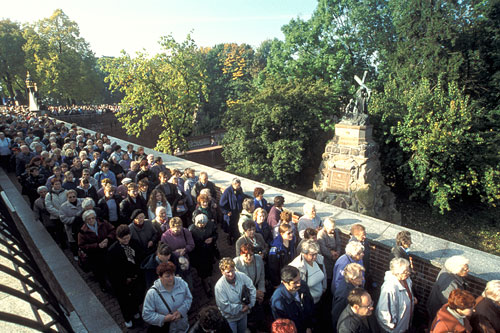 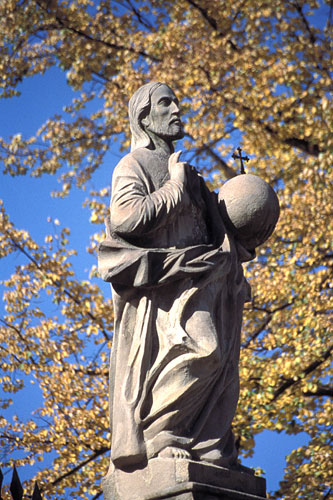 Other highly visited Catholic pilgrimage shrines in Poland include Kalwaria Zebrzydowska, Niepokalanow, Wambierzyce, Swietalipka, Wejherowo, Lichen, Tuchow, Gniezno and Koden. For further information on pilgrimage in Poland, consult publications of the Jagiellonian University, Institute of Geography such as Jasna Gorna: The World Centre of Pilgrimage, edited by Antoni Jackowski, and Kalawaria Zebrzydowska: Its Past, Present and Future as a Pilgrimage Centre

In addition to the Catholic pilgrimage sites listed in the preceding paragraph, Poland also has a much-visited Orthodox sacred site, known as the Holy Mountain of Grabarka. Roughly 130 kilometers east of the capital of Warsaw and 9 kilometers from the small town of Siemiatycze, Grabarka hill and its natural spring are believed to have miraculous healing qualities. Similar to the Hill of Crosses in Siauliai, Lithuania, Grabarka hill is surrounded by a forest of approximately 20,000 crosses ranging in size from a few centimeters to several meters tall. While pilgrims journey to the remote site all year long, there is a major festival on August 19, the day of the Transfiguration of the Savior. The ceremony begins the day before at 6 pm and continues with Masses and prayers throughout the night, culminating in Great Liturgy conducted at 10 am the next morning. More than 30,000 pilgrims come to the festival each year, arriving from all over Poland as well as Russia.

For further information on pilgrimage in Poland, consult publications of the Jagiellonian University, Institute of Geography such as Jasna Gorna: The World Centre of Pilgrimage, edited by Antoni Jackowski, and Kalawaria Zebrzydowska: Its Past, Present and Future as a Pilgrimage Centre.