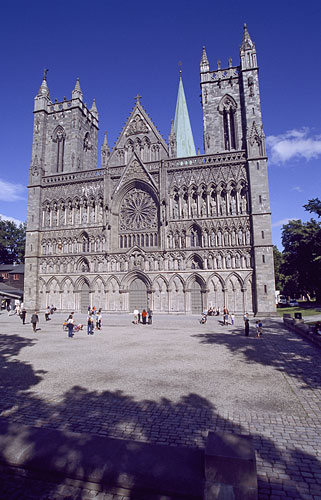 
Located on the west central coast of Norway, the town of Nidaros was the most visited Christian pilgrimage site in the Nordic countries during the late Middle Ages. Long a regional trading center for products from land and sea, Nidaros (now called Trondheim) became the first capital of Norway when King Olav Tryggvason established a royal fortress on the banks of the river Nidelva in 997.The real impetus for cities fame however, resulted from the life and death St. Olav, Norway's most well known religious crusader.

Olav Haraldsson was born in 995 in Ringerike in the southeastern part of Norway. When still in his early teens, he set out as a Viking and served as an officer, fighting battles in England and France. At the age of 18, Olav was baptized in Rouen, France and soon thereafter decided to go on a pilgrimage to Jerusalem. His pilgrimage was cut short by a vision in which he received direction to return to Norway and claim the royal throne. Arriving in Nidaros in 1015, he became the first national king to effectively wield power throughout the entire country. During his reign of 13 years King Olav went on several missionary excursions to remote parts of Norway, is known to have been extremely harsh in his conversion efforts and made many enemies. With his power base eroded by pagan chieftains resistant to the spread of Christianity, Olav was dethroned by King Canute, a Danish ruler of England. Fleeing Norway, he spent a year of exile in the Russian city of Kiev, where he had another vision telling him to reclaim his throne and complete the Christianization of Norway.

Fired with religious zeal, he returned to Norway in 1030 but was soon killed in a battle at Stiklestad on July 29. Immediately considered a martyr, his body was taken to be buried in the sandbank where Nidaros cathedral now stands. The body was exhumed more than a year after his death, found to have not decayed (so the legend goes) and the local bishop, supported by the masses, declared him St. Olav in 1031. A wooden chapel was built above his grave and pilgrims, hearing rumors of miraculous healings, began to visit the shrine. Following the canonization of St. Olav, the town rapidly grew in importance as a pilgrimage destination and this in turn stimulated its growth as a commercial center. Around 1070 a larger church was erected, which was then replaced by a Gothic cathedral constructed between 1183 and 1300. Great fires ravaged the cathedral five times and each time it was rebuilt and enlarged. The last major renovation occurred in 1869 and the high altar of the present cathedral is situated upon the burial site of St. Olav. Nidaros is Scandinavia's largest medieval building.

Before the Reformation, Olav's shrine was an opulently beautiful place, with many jewels and precious metals adorning his reliquary. So large was the reliquary that 60 men were required to carry it during its annual procession. After the Reformation in 1537, Olav's reliquary was taken to Copenhagen, melted down, and minted into coins. Pilgrimages to the cathedral were forbidden during the Reformation and it is only within the past few decades that there has been a return of pilgrims to the great cathedral. In medieval times, many thousands of pilgrims visited the shrine each year, particularly on the anniversary of St. Olav's death on July 29. Then as now, large numbers of pilgrims walked from Oslo to Trondheim, a journey of several weeks. The current Norwegian government has restored nearly 1000 kilometers of the old pilgrims trails and both religious and nature enthusiasts enjoy the beautiful scenery along the ancient way to Nidaros.

The photograph shows the western front of the cathedral with its rows of stone statues. Among those depicted in the statues are King Olav, various bishops and other saints, and the apostles Philip and Thomas. 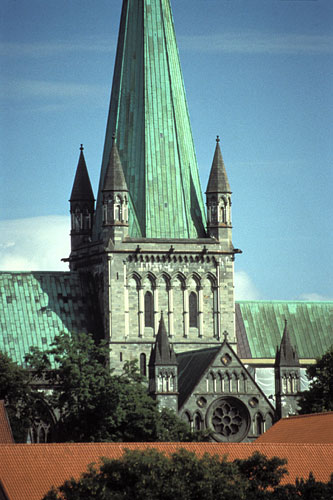