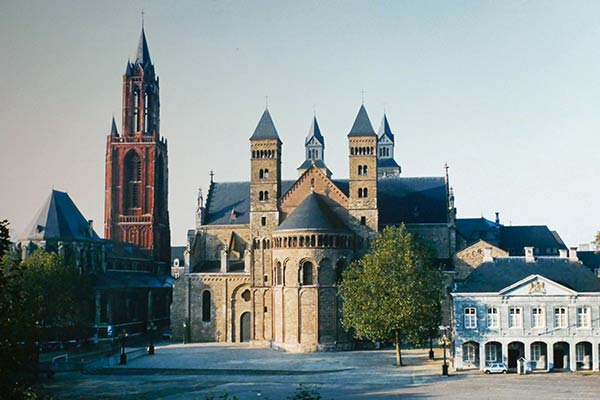 The Basilica of Saint Servatius is a Roman Catholic church dedicated to Saint Servatius, in the city of Maastricht, the Netherlands. The architecturally hybrid but mainly Romanesque church is situated next to the Gothic church of Saint John, backing onto the town's main square.

The present-day church is probably the fourth church that was built on the site of the grave of Saint Servatius, an Armenian missionary who was bishop of Tongeren and died allegedly in 384 in Maastricht. A large stone church built around 570 replaced a small memorial chapel on the saint's grave. This church was replaced by a larger church in the late 7th century, which was then replaced by the present-day structure, which was built in several stages over a period of more than 100 years. The nave was built in the first half of the 11th century, the transept in the second half of the century, and the choir in the 12th century. The Romanesque church was built during a period in which the chapter of Saint Servatius kept close ties to the Holy Roman Emperors, which resulted in a building that has the characteristics of a German imperial church. The dedication of the church in 1039 was attended by the emperor Henry III and twelve bishops. Most of the church's medieval provosts were sons of the highest-ranking German noble families. 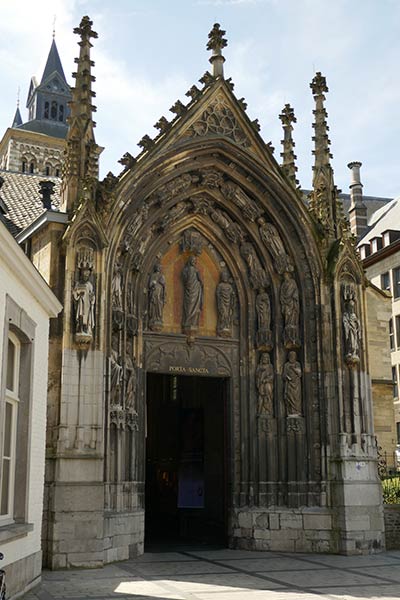 Entrance to the Basilica of St. Servatius (Enlarge)

Over the centuries the interior of the church underwent many changes. In the 17th century, the Gothic choir rood screen with sculpted depictions of the life of Servatius was demolished. Fragments from the 14th-century screen were discovered during the 1980s restoration works and are now kept in the church's lapidarium in the East crypt. By the end of the 18th century, the entire church interior had been painted white, the colorful medieval stained glass windows had been replaced by colorless glass, and the church looked distinctly Baroque. 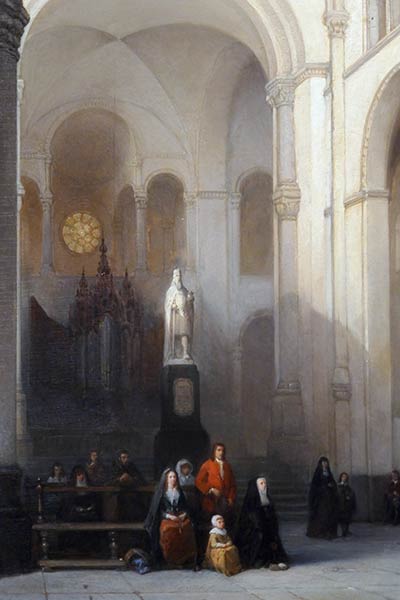 Painting of interior of Basilica of St. Servatius (Enlarge)

In 1797 the French revolutionaries dissolved the chapter and the church was used as a horse stable by the troops. In 1804 the church became a parish church once again. It was during this period that irreparable damage was done to the church interior. For liturgical reasons, it was considered to be necessary to lower the elevated choir. The underlying 11th-century crypt was entirely demolished and most of the carved capitals were lost. Similarly, the main altar on which the reliquary chest of Saint Servatius had been displayed for many centuries was demolished. Between 1866 and 1900 the church underwent major restorations during which some of the damage done earlier in the century was reversed.

Through the ages, the presence of the grave of Saint Servatius in the church crypt and the many relics in the church treasury, have drawn large numbers of pilgrims. Starting in the 14th century (but perhaps earlier) a seven-yearly pilgrimage was organized in cooperation with nearby Aachen Cathedral and Kornelimünster Abbey, attracting tens of thousands of visitors to the region. This so-calledHeiligdomsvaart continued until 1632 when Maastricht became affiliated with the Dutch Republic. The Heiligdomsvaart was revived in the 19th century and the tradition continues to the present time. The next Heiligdomsvaart will take place in July 2018. 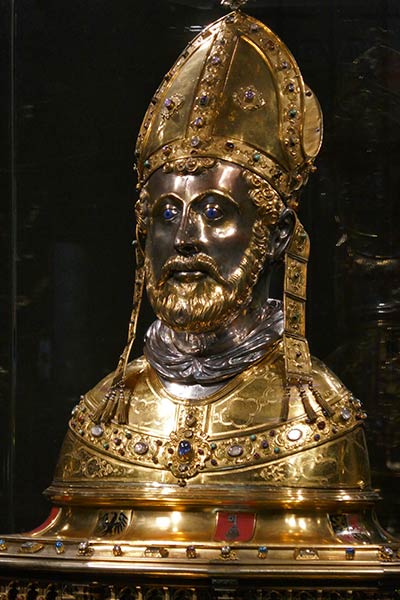 Since the donation of a silver reliquary in the shape of a Roman triumphal arch by Charlemagne's biographer Einhard in c. 830, the church has acquired many treasures, most of which are now kept in the Treasury. Amongst the highlights are the reliquary shrine and the reliquary bust of Saint Servatius, the key, the cup, the crozier and the pectoral cross of Saint Servatius, a large patriarchal cross, and many other reliquaries and liturgical vessels, as well as an important collection of medieval ivories and textiles.

Today, the Basilica of Saint Servatius is the main church of Maastricht. Pope John Paul II made the church a Basilica Minor during his visit in 1985. 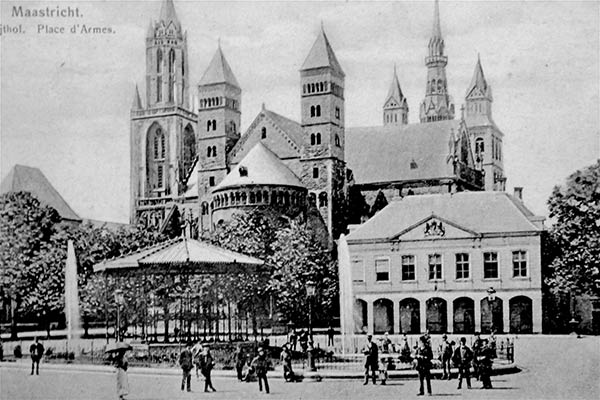