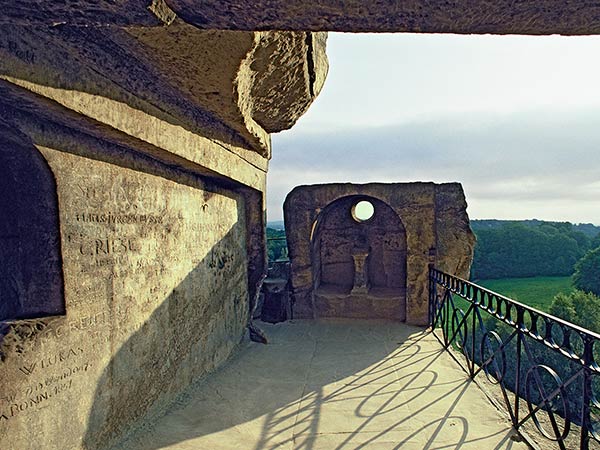 
Encompassing the old towns of Detmold and Horn, the Teutoburg district is historically claimed as the sacred heartland of Germany. Here took place episodes of the German heroic myths and the defeat of the Roman legions by Arminius. The region was also known as a place of pilgrimage in prehistoric, Celtic and early Saxon times. At the geomantic center of this ancient sacred region stand the Externsteine rocks, a chain of towering sandstone spires dating from the Cretacious period (about 70 million years ago). Shrouded in mystery, the Externsteine rocks are one of the most ardently debated archaeological sites in all of Central Europe. They were a sanctuary of nomadic reindeer hunters and from earliest times had an important influence on German history. Pagan rituals were performed here until the 8th century AD, when Charles the Great cut down the sacred Irmensul tree, the German tree of life and symbol of the old religion. Atop the tallest rock spire are the extremely well preserved remains of an enigmatic prehistoric temple.

Different theories have been suggested concerning the identity of the temple's builders and the use to which it was put. Some have described the shrine as a Mithraeum, or sanctuary for Roman soldiers adhering to the Persian cult of Mithras, while other scholars believe that such deities as the Germanic Teut, the Nordic Wodan, or the Bructerian prophetess Veleda were worshipped in the sanctuary. What is known with certainty however is that the temple was constructed according to astronomical orientations. The round window-like opening shown in the photograph has been demonstrated to have significant celestial alignments, including a view of the moon at its northern extreme and the sun at sunrise on the summer solstice.

The earliest historical mention of Externsteine comes from the 12th century when the site came under the control of a nearby Benedictine monastery. A series of artificial caves, which had been mysteriously carved into the base of the sandstone spires in ancient times, were enlarged and used as dwellings for Christian hermits and monks.

It is remarkable that the delicate and enchanting temple atop the central spire was not destroyed at this time, like so many other pagan sites presumed to be places of 'devil worship' by the medieval Christians. Similar to numerous other sacred sites in Europe today, Externsteine is much frequented by crowds of noisy tourists; if one is intent on experiencing the magic and holiness of this extraordinary place, the author recommends a surreptitious nocturnal visit. 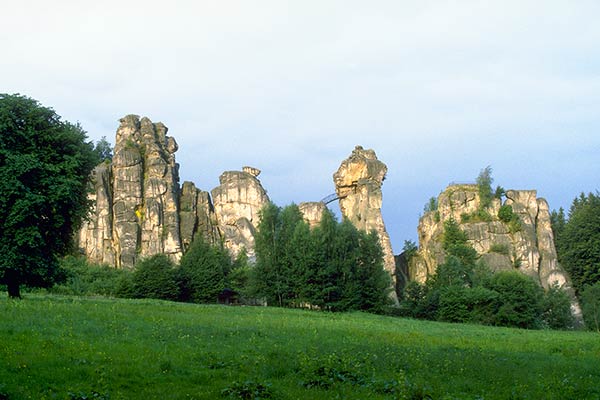 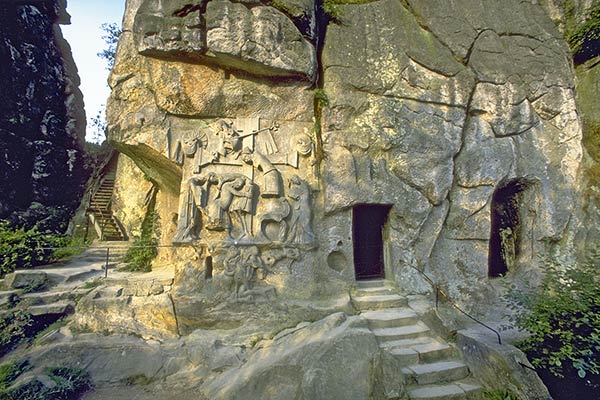