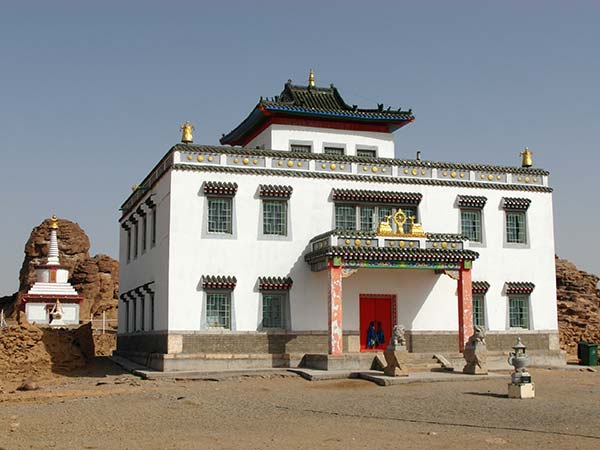 
Buddhism in Mongolia derives much of its recent characteristics from Tibetan Buddhism of the Gelug and Kagyu lineages. Traditionally, the Mongols ethnic religions involved worship of Heaven (the "eternal blue sky") and ancestors and the ancient North Asian practices of shamanism, in which human intermediaries went into trance and spoke to and for some of the numberless infinities of spirits responsible for human luck or misfortune.

Although the emperors of the Yuan dynasty in the 14th and 15th century had already converted to Tibetan Buddhism, the Mongols returned to their old shamanist ways after the collapse of their empire. In 1578 Altan Khan, a Mongol military leader with ambitions to unite the Mongols and to emulate the career of Genghis Khan, invited the head of the rising Gelug lineage to a summit. They formed an alliance that gave Altan Khan legitimacy and religious sanction for his imperial pretensions and that provided the Buddhist school with protection and patronage. Altan Khan of Mongolia gave the Tibetan leader the title of Dalai Lama, which his successors still hold.

Altan Khan died soon after, but in the next century the Gelug spread throughout Mongolia, aided in part by the efforts of contending Mongol aristocrats to win religious sanction and mass support for their ultimately unsuccessful efforts to unite all Mongols in a single state. Viharas (Mongolian datsan) were built across Mongolia, often sited at the juncture of trade and migration routes or at summer pastures where large numbers of herders would congregate for shamanistic rituals and sacrifices. Buddhist monks carried out a protracted struggle with the indigenous shamans and succeeded, to some extent, in taking over their functions and fees as healers and diviners, and in pushing the shamans to the fringes of Mongolian culture and religion.

The first contact of the Mongols with Buddhism goes back to the 4th century AD. Before that time the Topa Turks and the Wei Dynasty had had some influence on the Juan Juan Empire, which dominated Mongolia at that time. A later Buddhist influence is that of the Kitan in the 10th century, to which time a stupa in Kerulen Bars Khota and the remains of the Buddha statue at the Khalkhin Gol (river) date. In 1125 the Kitan dynasty falls and Mongolia reverts to a disorganized collection of warring tribes in which Nestorianism, Manichaeism and Shamanism are the main religions.

Contacts between Mongolians from the area North of the Gobi and Buddhism occurred in 1219 when the Mongolian general Mukali overran the city of Lan Ch'eng in the Shansi province and captured a monk by the name of Hai-yün, a follower of the Ch'an sect which was then popular in China. The Ch'an School of Buddhists was soon supported by Tibetans. Tibetan Buddhism was at that time still greatly influenced by the ancient shamanism and animism of Tibet, and thus may have been more compatible with the belief systems of the Mongols, many of whom remained faithful to shamanism and nature worship of their own ancestors.

In 1239 Ögedei's son Koden, having occupied the Sichuan province in China, decided to invade neighbouring Tibet. Quickly deciding to sue for peace, the Tibetans sent So-pan, the abbot of the Sakya Monastery, the headquarters of the Sakya sect of Tibetan Buddhism, to Koden. So-pan - Sakya Pandita - was a renowned scholar who had written numerous learned treatises, including the Treasury of Good Advice.

It was in the time of the Great Khans that the Tibetan form of Buddhism gains more influence in Mongolia. At the beginning of the 13th century Genghis Khan conquers Tibet. The leader of the biggest empire ever was known for his religious tolerance, having Nestorians, Christians, Moslems, Manicheïsts and Shamans within his realm. When after his death trouble arises in Tibet, his grandson is sent there to settle things. Although doing this with a trail of destruction, he makes friends with Sakya (Sa skya) Pandita, the patriarch of the Sa skya sect. With these two men the special Tibetan lama-patron relationship has its beginning. Godan's successor, Kublai Khan, continued this relation with Sakya Pandita's nephew Phags-pa. He was kept at the Mongolian court, but more for political than spiritual reasons. By giving home to a representative from the ruling Sa skya pa, Kublai hoped to win a friendly attitude on the side of the Tibetans. While being at the Mongolian court, Phags-pa converted great parts of the ruling class, even including Kublai. So for the first time Mongolia came under major Buddhist influence, although this seems to mainly have been limited to the upper class.

Then in 1307, upon the death of Kublai’s grandson Temür, another of his grandsons, Ananda, attempted to seize the throne of the Y üan Dynasty. While serving as viceroy of the Tangut land of Xia (centered around the current-day Chinese province of Ningxia), Ananda converted to Islam. He studied the Arabic language, learned the Koran by heart, and apparently dreamed of turning all of China into an Islamic country. His cousin Khaishan intervened, had Ananda put to death and mounted the throne himself. Khaishan, despite his treatment of his cousin, was a devout Buddhist. He invited the famous translator Chokyi Ozer to Beijing and initiated an extensive program of translating Buddhism texts from Tibetan into Mongolian. "By the merits [of Khaishan's works] human and animal diseases vanished from the land, and there were neither floods nor draughts; the rains were timely and good for crops, and happiness flourished. The monastic centers of studies and meditation competed with each other in their wealth and importance.

After the death of Kublai in 1294, his successors kept up outward observances of Tibetan Buddhism, but there are indications that the actual practice, at least in court circles, became increasingly corrupted by non-Buddhist influences. There are given references to black magic, animal sacrifices, and sex cults based on incorrect interpretations of certain esoteric tantric texts.

At the end of 16th century Altan Khan is in power. He meets with Sonam Gyatso, a Tibetan Buddhist leader whom he gives the title of Dalai Lama. Dalai is a Mongolian word meaning "vast" or "oceanic"; it is also a direct Mongolian translation of the Tibetan word gyatso and thus a particularly fitting title for Sonam Gyatso. From that period on Buddhism becomes the predominant religion in the Mongolian territories and establishes a big clergy.

In the late seventeenth and early eighteenth centuries, the sculptor par excellence among the Buddhist countries of Asia was the Undur Gegeen Zanabazar (1635-1723), the first Jebtsundamba Khutuktu, or Bogdo Gegeen (King Bogd), and the greatest sculptor of Mongolia. He was the founder of our art school "Zanabazar“. Since Zanabazar, this highest-ranking representative of the Buddhists in the 17th century, the title Khan Bogd (King Bogd) has been established. Khans were simultaneously highest-ranking Buddhist as well as profane leaders. The last Mongolian Khan Bogd died in 1924. He was the last religious and profane ruler of the Mongols who resided in the Khan Bogd Palace. The place of residence was called Ulaanbaatar, i.e. 'Red Warriors' or 'Red Heroes'.

At the end of the nineteenth century there were 583 monasteries and temple complexes and 243 incarnate lamas would be living in the Mongolian territories, of which 157 resided in Inner Mongolia. The Buddhist clergy controlled about 20 percent of the country’s wealth, and in the 1920s there were about 110'000 monks, making up one-third of the male population. 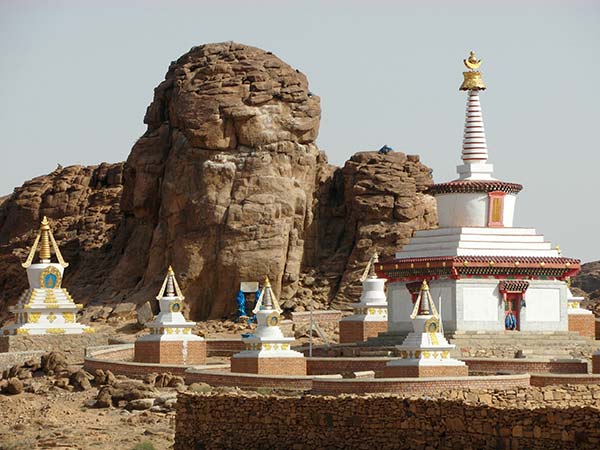 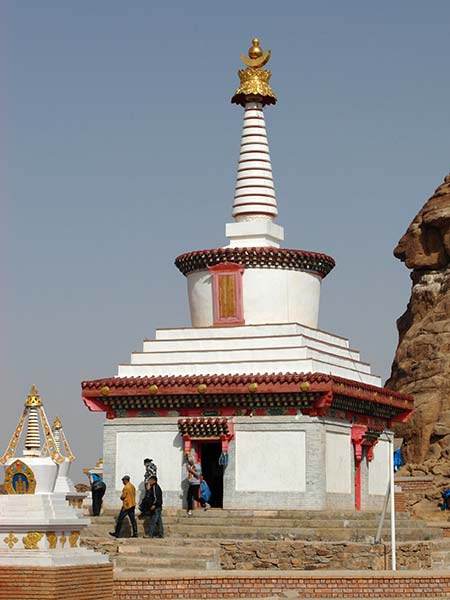 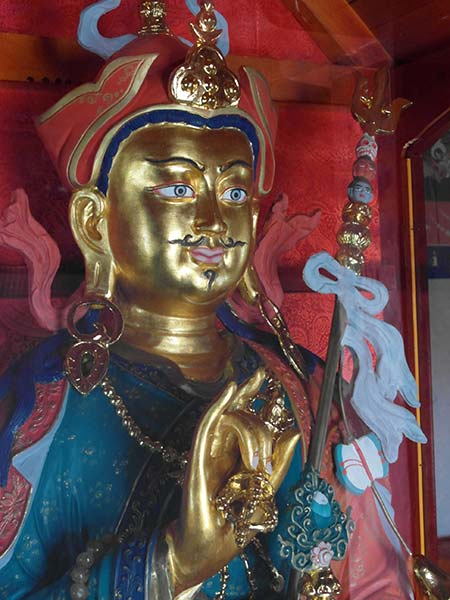 Statue of Padmasambhava, inside stupa at Demchig Hiid Monastery 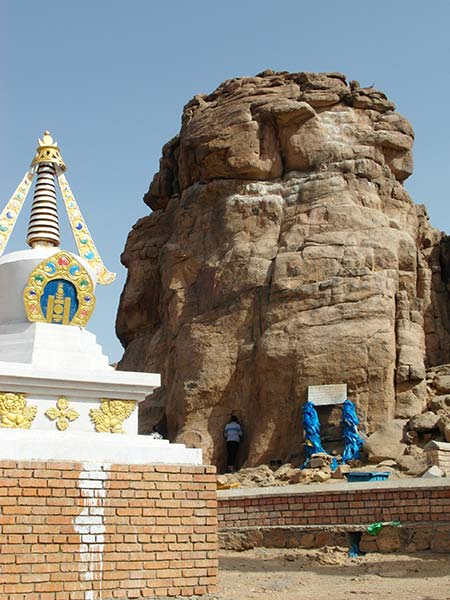 Shamanic sacred rock with pilgrim praying for ease in childbirth

Martin Gray is a cultural anthropologist, writer and photographer specializing in the study and documentation of pilgrimage places around the world. During a 38 year period he has visited more than 1500 sacred sites in 165 countries. The World Pilgrimage Guide web site is the most comprehensive source of information on this subject.
For additional information about Buddhism in Mongolia:
https://www.wikiwand.com/en/Buddhism_in_Mongolia

For additional information on the history of Buddhism
http://www.face-music.ch/bi_bid/historyofbuddhism_en.html