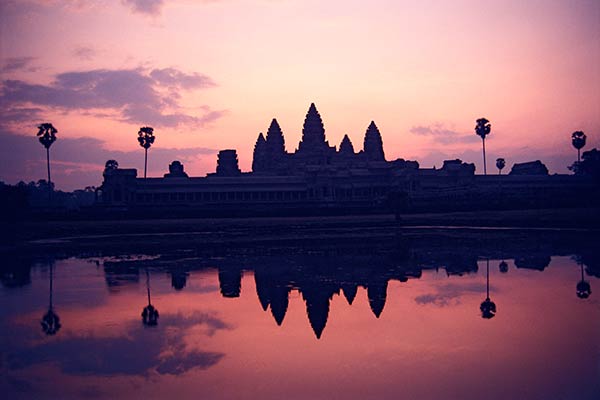 
There are two great complexes of ancient temples in Southeast Asia, one at Bagan in Burma, the other at Angkor in Cambodia. The temples of Angkor, built by the Khmer civilization between 802 and 1220 AD, represent one of humankind's most astonishing and enduring architectural achievements. From Angkor the Khmer kings ruled over a vast domain that reached from Vietnam to China to the Bay of Bengal. The structures one sees at Angkor today, more than 100 stone temples in all, are the surviving remains of a grand religious, social and administrative metropolis whose other buildings - palaces, public buildings, and houses - were built of wood and have long since decayed and disappeared.

Conventional theories presume the lands where Angkor stands were chosen as a settlement site because of their strategic military position and agricultural potential. Alternative scholars, however, believe the geographical location of the Angkor complex and the arrangement of its temples was based on a planet-spanning sacred geography from archaic times. Using computer simulations, it has been shown that the ground plan of the Angkor complex – the terrestrial placement of its principal temples - mirrors the stars in the constellation of Draco at the time of spring equinox in 10,500 BC. While the date of this astronomical alignment is far earlier than any known construction at Angkor, it appears that its purpose was to architecturally mirror the heavens in order to assist in the harmonization of the earth and the stars. Both the layout of the Angkor temples and the iconographic nature of much its sculpture, particularly the asuras ('demons') and devas ('deities') are also intended to indicate the celestial phenomenon of the precession of the equinoxes and the slow transition from one astrological age to another.

At the temple of Phnom Bakheng there are 108 surrounding towers. The number 108, considered sacred in both Hindu and Buddhist cosmologies, is the sum of 72 plus 36 (36 being ½ of 72). The number 72 is a primary number in the sequence of numbers linked to the earth's axial precession, which causes the apparent alteration in the position of the constellations over the period of 25,920 years, or one degree every 72 years. Another mysterious fact about the Angkor complex is its location 72 degrees of longitude east of the Pyramids of Giza. The temples of Bakong, Prah Ko and Prei Monli at Roluos, south of the main Angkor complex, are situated in relation to each other in such a way that they mirror the three stars in the Corona Borealis as they appeared at dawn on the spring equinox in 10,500 BC. It is interesting to note that the Corona Borealis would not have been visible from these temples during the 10th and 11th centuries when they were constructed.

Angkor Wat, built during the early years of the 12th century by Suryavaram II, honors the Hindu god Vishnu and is a symbolic representation of Hindu cosmology. Consisting of an enormous temple symbolizing the mythic Mt. Meru, its five inter-nested rectangular walls and moats represent chains of mountains and the cosmic ocean. The short dimensions of the vast compound are precisely aligned along a north-south axis, while the east-west axis has been deliberately diverted 0.75 degrees south of east and north of west, seemingly in order to give observers a three day anticipation of the spring equinox.

Unlike other temples at Angkor, Ta Prohm has been left as it was found, preserved as an example of what a tropical forest will do to an architectural monument when the protective hands of humans are withdrawn. Ta Prohm's walls, roofs, chambers and courtyards have been sufficiently repaired to stop further deterioration, and the inner sanctuary has been cleared of bushes and thick undergrowth, but the temple has been left in the stranglehold of trees. Having planted themselves centuries ago, the tree's serpentine roots pry apart the ancient stones and their immense trunks straddle the once bustling Buddhist temple. Built in the later part of the 12th century by Jayavarman VII, Ta Prohm is the terrestrial counterpart of the star Eta Draconis the Draco constellation.

During half-millennia of Khmer occupation, the city of Angkor became a pilgrimage destination of importance throughout Southeastern Asia. Sacked by the Thais in 1431 and abandoned in 1432, Angkor was forgotten for a few centuries. Wandering Buddhist monks, passing through the dense jungles, occasionally came upon the awesome ruins. Recognizing the sacred nature of the temples but ignorant of their origins, they invented fables about the mysterious sanctuaries, saying they had been built by the gods in a far ancient time. Centuries passed, these fables became legends, and pilgrims from the distant reaches of Asia sought out the mystic city of the gods. A few adventurous European travelers knew of the ruins and stories circulated in antiquarian circles of a strange city lost in the jungles. Most people believed the stories to be nothing more than legend, however, until the French explorer Henri Mouhot brought Angkor to the world's attention in 1860. The French people were enchanted with the ancient city and beginning in 1908 funded and superbly managed an extensive restoration project. The restoration has continued to the present day, excepting periods in the 70's and 80's when military fighting prevented archaeologists from living near the ruins.

Orthodox archaeologists sometimes interpret the temples of the Angkor complex as tombs of megalomaniacal kings yet in reality those kings designed and constructed the temples as a form of service to both god and their own subjects. The temples were places not for the worship of the kings but rather for the worship of god. Precisely aligned with the stars, constructed as vast three dimensional yantras and adorned with stunningly beautiful religious art, the Angkor temples were instruments for assisting humans in their realization of the divine.

Jayavaram VII, spoke of his intentions in erecting temples as being:

"full of deep sympathy for the good of the world, so as to bestow on men the ambrosia of remedies to win them immortality….By virtue of these good works would that I might rescue all those who are struggling in the ocean of existence." 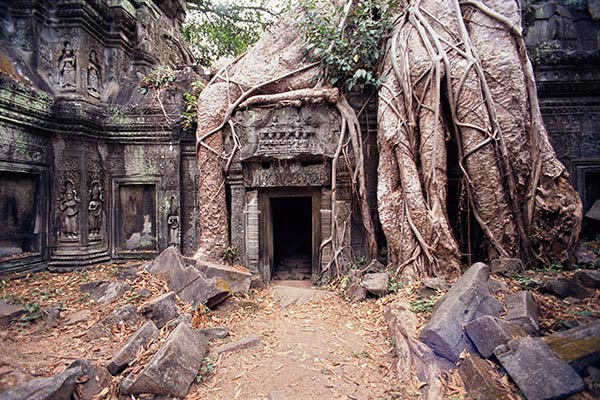 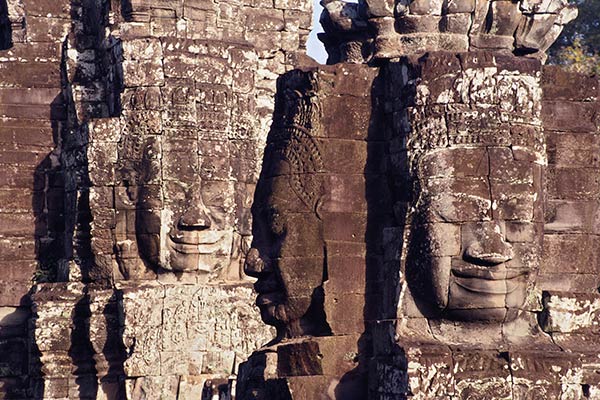 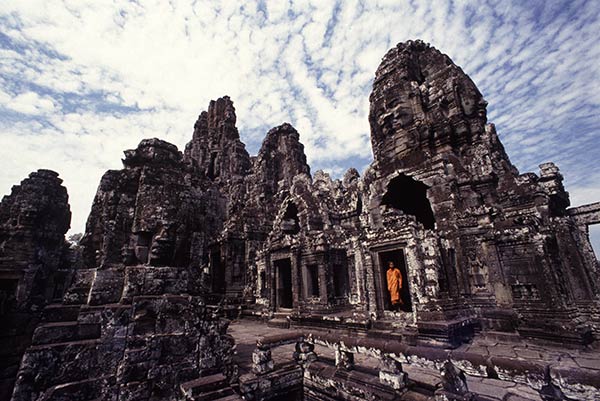 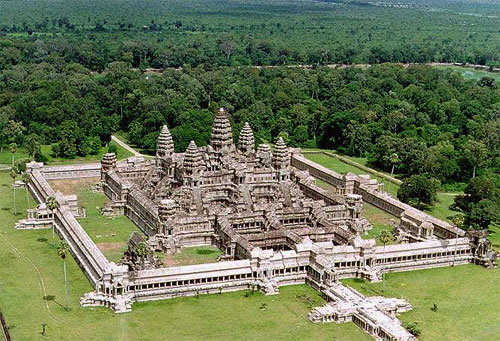 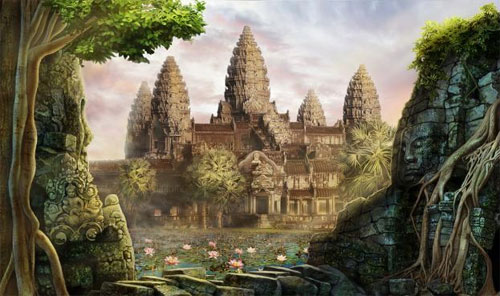 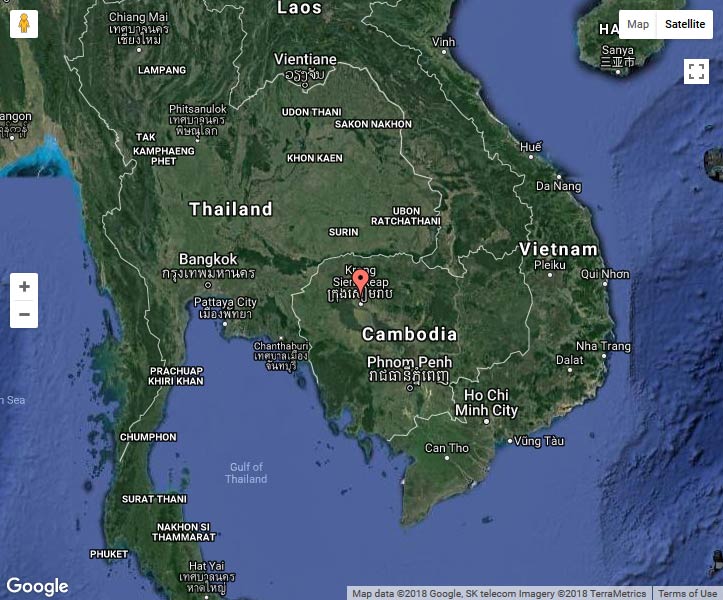