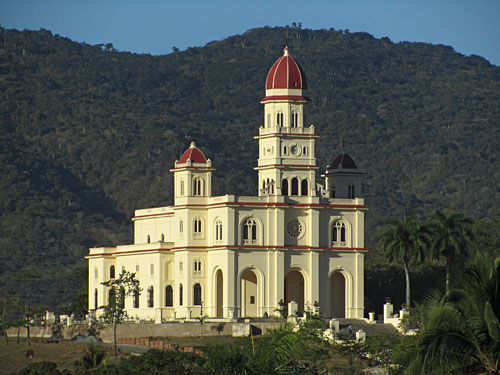 Basilica of Our Lady of Charity, El Cobre, Cuba


There are two pilgrimages shrines in Cuba, the Basilica of Our Lady of Charity in El Cobre, near Santiago in the eastern part of the island, and the church of San Lázaro, near Havana in the west.

Twenty kilometers northwest of the city of Santiago in the small village of El Cobre is located the National Shrine of Our Lady of Charity. Known as Nuestra Senora de la Caridad, or Cachita, in Spanish, her shrine is visited by pilgrims throughout the year, with the primary holy day being on September 8, when thousands of pilgrims come from all over the island.

The story behind the La Virgen de la Caridad del Cobre, began around 1608 (sometime between 1604 and 1612 depending on the source). Two brothers, Rodrigo and Juan de Hoyos, and their slave, Juan Moreno, set out on a small boat to the Bay of Nipe for salt. They needed the salt for the preservation of meat that supplied the workers and inhabitants of Santiago del Prado, now known as El Cobre. While out in the bay, a storm arose and violently rocked their boat. Juan, the slave, was wearing a medal with the image of the Virgin Mary. The three men began to pray for her protection. Suddenly, the skies cleared and the storm was gone. In the distance, they saw a strange object floating in the water. They rowed in its direction and at first mistook it for a bird, but then saw that it was a statue of a girl. As they came closer they were able to see that it was a statue of the Virgin Mary holding the child Jesus on her right arm and a gold cross in her left hand. The statue was fastened to a board with an inscription saying "Yo Soy la Virgen de la Caridad" or "I am the Virgin of Charity." The statue was dressed with cloth and the Virgin had dark colored skin, similar to the so-called Black Madonna statues found in many churches in Europe. Much to their surprise, the statue remained completely dry while afloat in the water. 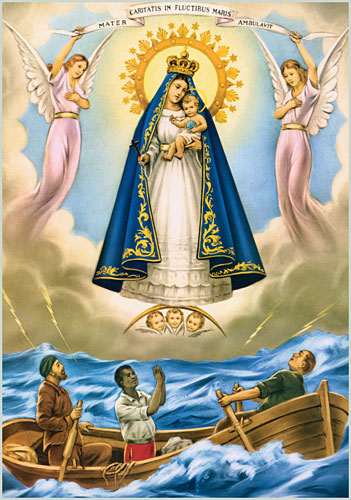 Painting of Our Lady of Charity, El Cobre


They took the statue onto their boat and returned to the town of Barajagua, where they showed it to a government official named Don Francisco Sánchez de Moya, who then ordered a small chapel to be built in her honor. One night, Rodrigo went to visit they statue, but discovered that the image was gone. He organized a search party, but had no success in finding Our Lady of Charity. Then, the next morning, she was mysteriously back on the altar, as if nothing had happened. This was inconceivable, as the chapel had been locked. This event happened three more times. The people of Barajagua came to the conclusion that she wanted to be in a different place, so they took her to El Cobre. It was at this point that she became known as "Nuestra Señora de la Caridad del Cobre" or "Our Lady of Charity of El Cobre". Much to the dismay of people in El Cobre, the disappearance of the statue continued to happen.

One day while playing outside a young girl named Apolonia came across the statue on top of a small hill. Soon thereafter a church was erected on the hill, the story circulated around the island that the Virgin had chosen to have her sanctuary there, and Cobre began its history as a pilgrimage destination. 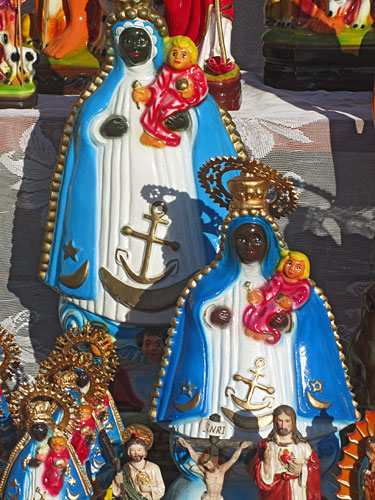 Statues of Our Lady of Charity, El Cobre, Cuba


Our Lady of Charity was declared the patroness of Cuba by Pope Benedict XV in 1916, the present church in Cobre was built in 1926, and she was crowned in the Eucharistic Congress held in Santiago de Cuba in 1936. Pope Paul VI raised her sanctuary to the category of Basilica in 1977.

In Cuba the Virgin of Charity is also much favored by the followers of Santería, a syncretic religion of West African and Caribbean origin influenced by Roman Catholic Christianity. The Virgin is synonymous with Ochun, the Santería orisha, or saint, of love and dancing. Ochun is symbolized by the color yellow and at the shrine it is common to see many women dressed brightly in this color.

Santería is a system of beliefs that merges the Yoruba religion (which was brought to the New World by slaves imported to the Caribbean to work the sugar plantations) with Roman Catholic and Native Indian traditions. These slaves carried with them various religious customs, including a trance for communicating with their ancestors and deities, and sacred drumming. In order to preserve their traditional beliefs, the slaves had no choice but to disguise their orishas as Catholic saints. When the Roman Catholic slave owners observed Africans celebrating a Saint's Day, they were generally unaware that the slaves were actually worshiping one of their sacred orishas. Due to this history, in Cuba today, the terms "saint" and "orisha" are sometimes used interchangeably. A large percentage of the practitioners of Santería also consider themselves to be Catholics, have been baptized, and often require initiates to be baptized as well. 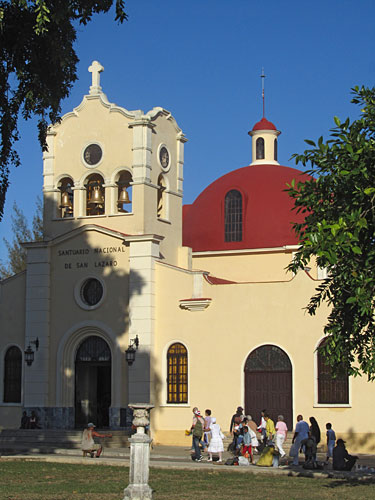 The church of San Lázaro, Cuba’s second most important pilgrimage site, located in the town of Rincon 25 kilometers south of Havana, is also considered sacred by both Christians and followers of Santería. San Lázaro, the ‘Miracle Worker’ was a Christian saint known for his ministrations to lepers and the poor. He is paralleled in Santería by the orisha Babalú Ayé, the saint of sickness. All year long, and especially on the Saint’s Day of December 17, devotees of both Santería and Catholicism flock to San Lázaro to pray for good health and miracles of healing. San Lázaro is often depicted as an old man nearly naked and bearded, dressed in rags and with a pair of crutches, with his legs full of sores. 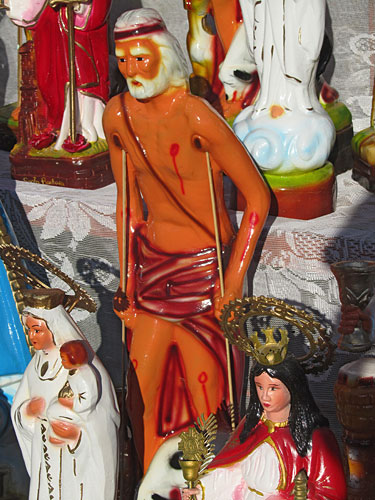 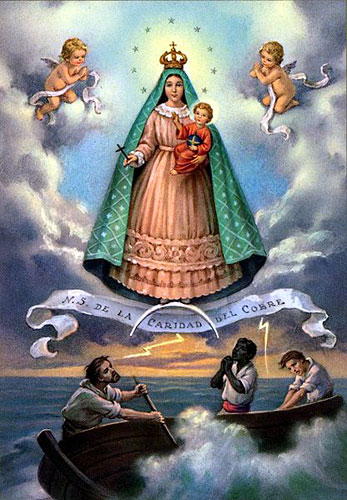 Painting of Our Lady of Charity, El Cobre 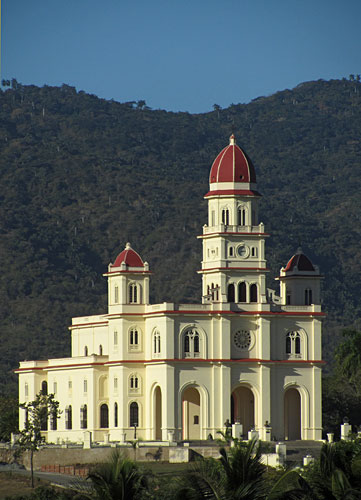 Basilica of Our Lady of Charity, El Cobre, Cuba