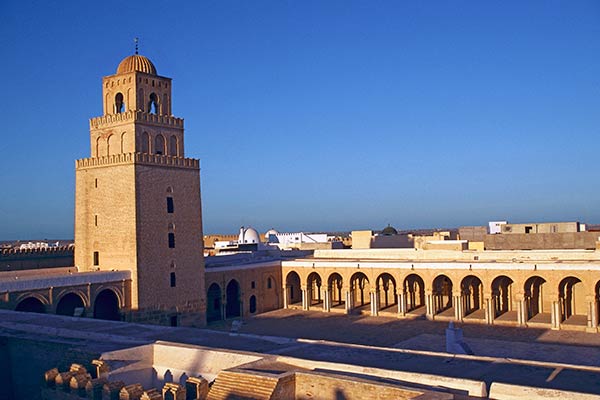 
Historical records relate that in 670 AD the Arab conqueror, Uqba ibn Nafi crossed the deserts of Egypt and began the first Muslim conquest of the Maghreb region of North Africa. Establishing military posts at regular intervals along his route, Uqba ibn Nafi came to the site of present day Kairouan and there decided to encamp his soldiers for some days (Kairouan, also spelled Qayrawan, means "camp" in Arabic).

Old chronicles describe the region as completely deserted, covered with impenetrable thickets, and being distant from trade routes. Apparently inhospitable as a long term settlement site, why then did this temporary military camp soon become the greatest Muslim city in North Africa and the 4th holiest city of Islam (after Mecca, Medina and Jerusalem).

To answer this question we must look beyond historical records to the earliest legends of the site. Here we find mention of an incident that occurred during the initial encampment of Uqba ibn Nafi, an incident which, because of its miraculous nature, most history books have chosen to ignore. The legend tells of warrior's horse that stumbled on a golden goblet buried in the sands. This goblet was recognized as one that had mysteriously disappeared from Mecca some years before. When the goblet was dug from the desert sand, a spring miraculously appeared and the waters of this spring were said to issue from the same source that supplies the sacred Zamzam well in Mecca. The power of these three miracles - the mysteriously lost and then found Meccan goblet, the miraculous gushing forth of the spring, and the source of that spring - exercised a magnetic effect upon the early North African Islamic people and thereby established the site of Kairouan as a pilgrimage destination for ages to come.

By 698, following several more military campaigns in the Maghreb, the Arabs had driven the Byzantines from their garrisons in Carthage and become masters of the provinces of North Africa, called by them Ifriqiya. The town of Kairouan became the capital of this vast province. Governors were appointed to the province by the Ommayyad and Abassid caliphs (ruling from Damascus and Baghdad), and they exercised their rule from Kairouan. This tradition was continued over the centuries by the Aghlabid emirs (9th century), the Fatamid caliphs (10th century), and the Zirid emirs (11th century). During these centuries, the city became one of the most important cultural centers in the Arab world, witnessing a flowering of sciences, literature and the arts. Agriculture was favored by the execution of sizable irrigation projects and an active increase in trade with the surrounding regions added to the general prosperity. Kairouan grew in size and beauty and no where was this more evident than in the construction and continuing elaboration of its Great Mosque. 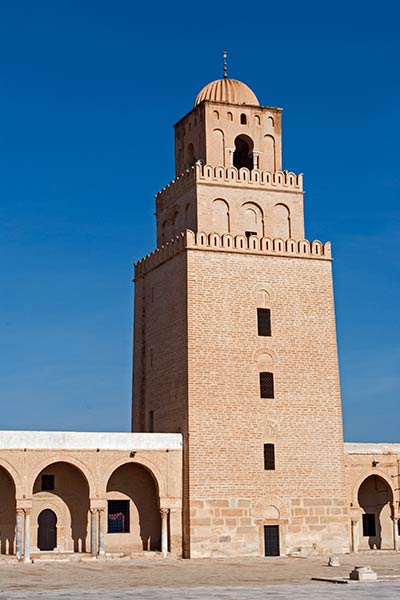 The Great Mosque of Kairouan (Enlarge)


From the 11th century onward, however, Kairouan ceased to be the capital of Arab Ifriqiya. Tunis, Tlemcen, Fez, Marrakech and other North African cities usurped its political and economic prominence. Slowly the ancient city shrunk in size until it covered scarcely a third of the area occupied by the metropolis of the Aghlabids, the Fatamids, and the Zirids. Yet, as a holy city, Kairouan grew in importance with the passing centuries and its splendid mosque became a magnet for pilgrims from Muslim territories throughout Northern and Saharan Africa.

The Great Mosque, also known as the Sidi Oqba mosque, had its simple beginnings in 670 AD, during the time of Uqba ibn Nafi, the original founder of Kairouan. As the city expanded during the following three hundred years, the original mosque was torn down and rebuilt in 703, again in 774, and then significantly enlarged by rulers of the Aghlabid dynasty in 836 and 863. By the end of the 9th century the mosque had attained the size and proportions that it exhibits today, though numerous renovations and ornamentations were conducted during the 13th and 14th centuries by the Hafsid dynasty rulers and during the 17th, 18th and 19th centuries (when the region was controlled by the Turks) by the Mouradite and Husseinite rulers.

The Great Mosque of Kairouan takes the general form of a rectangle with sides of 242, 229, 410 and 406 feet. This enormous space contains a prayer hall, a courtyard and a soaring minaret. Surrounding this sacred area is an enclosing wall reinforced by projecting buttresses and two stone towers and pierced by nine doorways. The marble-paved courtyard is flanked by three porticoes made up of long naves whose roofs are supported by arches. These arches are in turn supported by dozens of lovely marble columns which various Arab rulers and builders removed from more ancient Roman and Byzantine sites. The minaret is three stories tall, 103 feet high by 34 feet wide, with its lower stories composed of stone blocks taken from classical Roman buildings. This minaret, built from 724 to 728 AD, is the oldest standing minaret in the world and is widely recognized as one of the greatest gems of Islamic architecture. The prayer hall, built in the 9th century, is 123 feet deep and 230 feet wide. 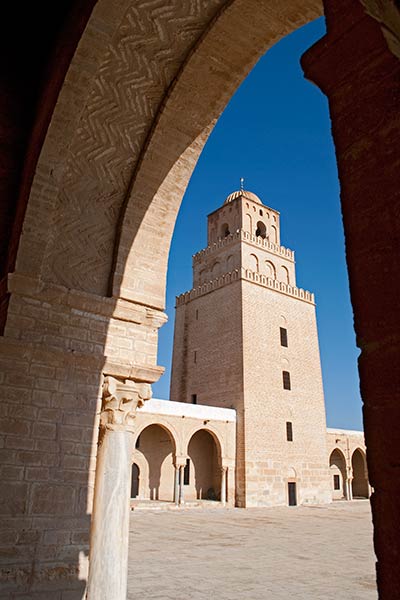 The Great Mosque of Kairouan (Enlarge)


Commenting on the interior of the Prayer Hall, the Islamic historian Paul Sebag (The Great Mosque of Kairouan) says: "It is decorated with extreme richness. All of the resources of Islamic ornamentation, carved or painted, have been lavished here on marble, stone, pottery, or wood. This ornamentation borrows its elements from the vegetable world, from geometry, and from epigraphy. Its flora inherited from the Hellenistic tradition the acanthus, the vine, and even the palm tree; it was enriched by oriental plants such as the lotus and the homa, but above all it evolved an imaginary and idealized plant world made up of rinceaux and tresses, of palmettes and fleruons, all of extreme elegance and grace. The geometrical ornamentation of pagans, Christians, and Berbers was extended and refined before being used for the creation of surprising and strange new figures. Arabic writing lends itself here to the fantasy of the calligrapher and reveals its incomparable qualities as decoration. These elements are juxtaposed and mingled to compose a decor which is enchanting......Moving forward with slow steps through the half-light in which the sanctuary swims, we suddenly find that the stones, when ordered by an inspired mind, can attain to sublime poetry and move us profoundly."

"I know of three religious buildings in the world that have given me the unexpected and shattering emotion that was aroused in me by this barbaric and astonishing monument: Mont Saint-Michel, Saint Mark's in Venice, and the Palatine Chapel in Palermo. These three are reasoned, studied, and admirable work of great architects sure of their effects, pious of course, but artistic first, inspired as much or more by their love of line, of form, and of decoration, as by their love of God. But at Kairouan it is something else. A race of fanatics, nomads scarcely able to build walls, coming to a land covered with ruins left by their predecessors, picked up here and there whatever seemed most beautiful to them, and, in their own turn, with these debris all of one style and order, raised, under the guidance of heaven, a dwelling for their God, made of pieces torn from crumbling towns, but as perfect as the purest conceptions of the greatest workers in stone."

Other important sacred sites in Tunisia are:

Located in remote regions of Tunisia, often upon lofty and nearly inaccessible peaks, are small domed tombs (marabouts) of popular Islamic saints. Maraboutism, or the worship of saints, began under the Hafsides Dynasty (13th - 16th centuries) and evolved into a thriving devotional cult. Originally warrior monks or sages living in fortified monasteries, the Marabouts functioned as healers and spiritual advisors for local people whose religious practices involved a mix of Islamic beliefs and ancient pagan rituals. The marabout tombs, also called Zawiyas, are the scene of annual pilgrimages and are especially popular with women. Musical ceremonies, singing and dancing, and vibrant sessions of prayer characterize these pilgrimage festivals. 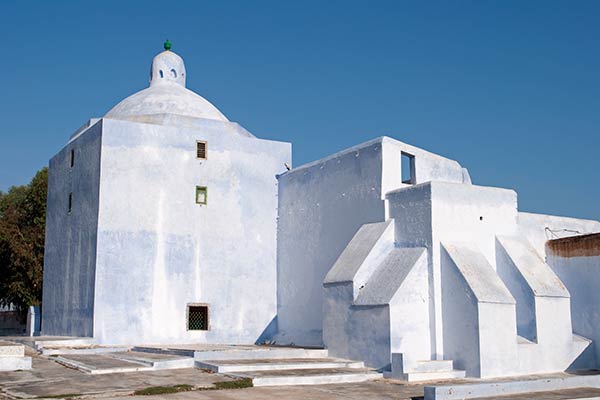 While the original mausoleum dates from the 7th century AD, most of what stands today was added at the end of the 17th century. The dome over the tomb was completed in 1629 and the minaret in 1690. The entrance to the shrine is through a passageway leading to a beautiful cloistered courtyard adorned with tiles and stuccoes depicting the Great Mosque in Mecca. In the northwestern corner of the courtyard is a small room with the tomb of the saint and his burial stone is draped with green, white and red fabrics. Non Muslims are not permitted to enter the shrine room. Another small room on the opposite side of the courtyard contains the tomb of the architect of the Great Mosque of Kairouan. 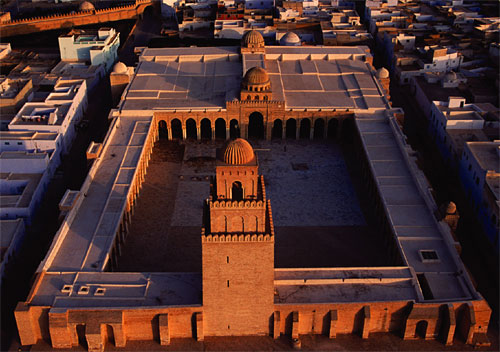