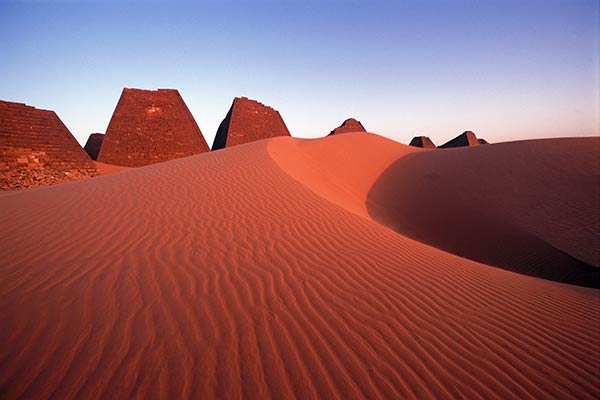 
In approximately 1000 BCE, following the collapse of the 24th Egyptian dynasty, the Nubian kingdom of Kush arose as the leading power in the region of the Middle Nile. From 712 - 657 BCE, the Kushite kings conquered and ruled much of Egypt. Around the time of 300 BCE, the capital and royal burial ground of the kingdom moved from Napata further south to the Meroe region, located between the 5th and 6th cataracts of the Nile. Meroe was ideally situated at the junction of river and caravan routes, to connect central Africa, via the Blue and White Niles, with Egypt, the Red Sea and the Ethiopian highlands. Historical information concerning the history of the Kushite kingdom and Meroe is limited. By approximately the 1st century BCE, when the Kushinite royalty and their scribes stopped writing in Egyptian and began using their own script, it becomes impossible to understand their official inscriptions. Thus far the Kushite script has not been deciphered and historical knowledge of the civilization is based on archaeological findings and surviving Greek and Roman reports.

The pharaonic tradition of dynastic Egypt continued with a succession of rulers at Meroe, who erected stelae to record the achievements of their reigns and pyramids to contain their tombs. Meroe's political succession system was not always hereditary; the matriarchal royal family member deemed most worthy often became king. The queen mother's role in the selection process was crucial to a smooth succession. The crown appears to have passed from brother to brother (or sister) and only when no siblings remained from father to son. The extensive ruins of pyramids, temples and palaces at Meroe indicate a cohesive political system that utilized a large force of laborers, architects and artists.

During the height of its power in the second and third centuries BCE, Meroe extended over a region from the third cataract in the north to Sawba, near present-day Khartoum, in the south. This area was the heartland of the later Kushite kingdom, and came to be known in classical literature as "the Island of Meroe." The rulers of Meroe were contemporaries with the Ptolemies of Egypt and the Romans. In the third century BC, they maintained good relations with the Ptolemies, since the kings of the two neighboring Nile states collaborated in renovating the temples of Lower Nubia that were sacred to both Kush and Egypt. Agents of the Ptolemies also traveled up the Nile as explorers and emissaries, some perhaps traveling to Meroe to haggle with the Kushite ruler over the price of war elephants which they sought to purchase for the armies of Egypt. Relations between Meroe and Egypt, however, were not always peaceful. In 23 BCE, in response to Meroe's military advance into Upper Egypt, a powerful Roman army moved south and destroyed Napata, the religious center of the Kushite kingdom. The Romans enslaved its inhabitants but then departed the area, considering it too poor for permanent settlement. Finally the Kushite kingdom declined following the expansion of the Abyssinian state of Axum (in modern Ethiopia). About 350 ACE, an Axumite army captured and destroyed Meroe, thereby ending the kingdom's independent existence.

The major god of the Kushite religion was a divinity of regional origin. Known as Apede-mak, and possibly a lion form of the Egyptian god Amun, he was sometimes associated with the moon. Frequently portrayed as an armored and lion-headed man, he was depicted in temples standing or seated on an either an elephant or a throne, while holding weapons, prisoners or lions and elephants. Grand temples were constructed in his honor at numerous places throughout the Kushite region.

The most visible remains at Meroe are its pyramids, which contained the tombs of more than forty kings, queens, and other important individuals. Given the existence of several large tomb-pyramids of queens and the remains of buildings exclusively bearing their names, Meroe after the 3rd century BCE appears to have been ruled by queens as well as kings. While these royal tombs were all plundered in ancient times, frescos preserved in the tombs show that the rulers were either burned, mummified (or not), and then covered with jewelry and laid in wooden cases. Some of the tombs, of both royal and wealthy individuals, also contained the skeletal remains of other humans, as well as animals. These associated burial remains indicate a belief, similar to that in dynastic Egypt, that the deceased would need and enjoy the same things in the afterlife as they had while living. Additional damage was done to the pyramids by the 19th century Italian explorer Giuseppe Ferlini who demolished the tops of more than forty pyramids in his search for treasures. Ferlini found gold in only one pyramid and his plundered artifacts were later sold to European museums. Contemporary archaeological excavations have revealed that some of the larger tombs still contain remains of weapons, wooden furniture, pottery, stained glass, and silver and bronze vessels, many of these being of Egyptian, Greek and Roman origins. Today Meroe is the largest archaeological site in the Sudan. Situated about a half a mile from the Nile, the city ruins extend over a square mile in area. Meroe was included in the UNESCO list of World Heritage sites in 2003. 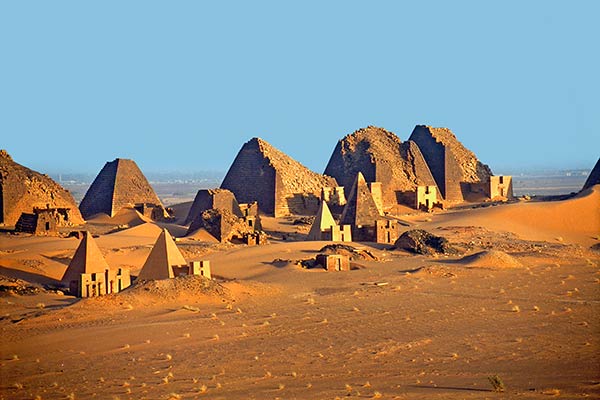