Sacred Sites of the Dogon, Mali 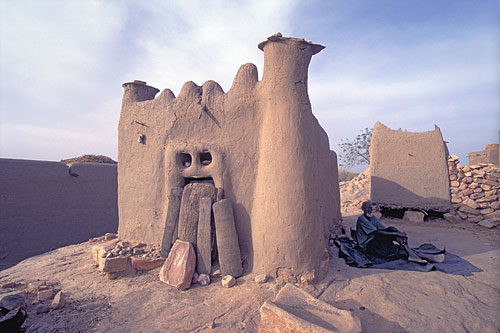 
The Dogon are an ethnic group located mainly in the districts of Bandiagara and Douentza in Mali, West Africa. This area is composed of three distinct topographical regions: the plain, the cliffs, and the plateau. Within these regions the Dogon population of about 300,000 is most heavily concentrated along a 200-kilometer (125 mile) stretch of escarpment called the Cliffs of Bandiagara. These sandstone cliffs run from southwest to northeast, roughly parallel to the Niger River, and attain heights up to 600 meters (2000 feet). The cliffs provide a spectacular physical setting for Dogon villages built on the sides of the escarpment. There are approximately 700 Dogon villages, most with fewer than 500 inhabitants.

The precise origins of the Dogon, like those of many other ancient cultures, are lost in the mists of time. The early histories are informed by oral traditions (that differ according to the Dogon clan being consulted) and archaeological excavation (much more of which needs to be conducted). Because of these inexact and incomplete sources, there are a number of different versions of the Dogon’s origin myths, as well as differing accounts of how they got from their ancestral homelands to the Bandiagara region. The people call themselves Dogon or Dogom, but in the older literature they are most often called Habe, a Fulbe word meaning ‘stranger’ or ‘pagan.’ Certain theories suggest the tribe to be of ancient Egyptian descent. After living in the region of Libya, they are believed to have migrated to somewhere in the region of Burkina Faso, Guinea or Mauritania (different scholarly sources give different places for this period). Around 1490 AD, fleeing invaders and/or drought, they migrated to the Bandiagara cliffs of central Mali. Carbon-14 dating techniques used on excavated remains found in the cliffs indicate that there were inhabitants in the region before the arrival of the Dogon; these were the Toloy culture of the 3rd to 2nd centuries BC, and the Tellem culture of the 11th to 15th centuries AD. 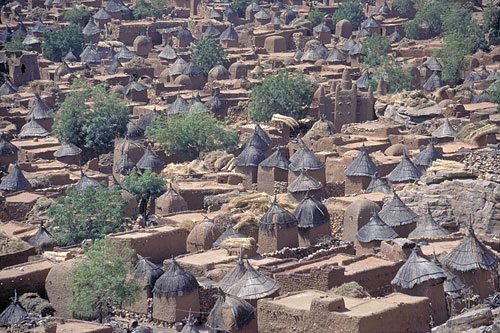 
The earliest study of the Dogon was undertaken in 1903 by Louis Desplagnes, a lieutenant in the French colonial army. The first scientists to visit and study the Dogon people were the French anthropologists Marcel Griaule and Germaine Dieterlen, who initially made contact with the Dogon in 1931 and continued to intensively research them for the next three decades. Griaule and Dieterlen conducted detailed investigations of the complex Dogon rituals and symbolism, and the cosmological ideas of which they are an expression. Griaule’s two most important works are Masques Dogons (1938) and Dien d’Eau (1948). The latter work was published in English in 1965 under the title Conversations with Ogotemmeli: An Introduction to Dogon Religious Ideas.

The religious beliefs of the Dogon are complex and knowledge of them varies within Dogon society. Dogon religion is defined primarily through the worship of the ancestors and the spirits that they encountered as they slowly migrated from their obscure ancestral homelands to the Bandiagara cliffs. There are three principal cults among the Dogon; the Awa, Lebe and Binu. The Awa is a cult of the dead, whose purpose is to reorder the spiritual forces disturbed by the death of Nommo, a mythological ancestor of great importance to the Dogon. Members of the Awa cult dance with ornate carved and painted masks during both funeral and death anniversary ceremonies. There are 78 different types of ritual masks among the Dogon and their iconographic messages go beyond the aesthetic, into the realm of religion and philosophy. The primary purpose of Awa dance ceremonies is to lead souls of the deceased to their final resting place in the family altars and to consecrate their passage to the ranks of the ancestors.

The cult of Lebe, the Earth God, is primarily concerned with the agricultural cycle and its chief priest is called a Hogon. All Dogon villages have a Lebe shrine whose altars have bits of earth incorporated into them to encourage the continued fertility of the land. . According to Dogon beliefs, the god Lebe visits the hogons every night in the form of a serpent and licks their skins in order to purify them and infuse them with life force. The hogons are responsible for guarding the purity of the soil and therefore officiate at many agricultural ceremonies.

The cult of Binu is a totemic practice and it has complex associations with the Dogon’s sacred places used for ancestor worship, spirit communication and agricultural sacrifices. Marcel Griaule and his colleagues came to believe that all the major Dogon sacred sites were related to episodes in the Dogon myth of the creation of the world, in particular to a deity named Nommo. Nommo was the first living being created by Amma (the sky god and creator of the universe) and he soon multiplied to become four sets of twins. One of the twins rebelled against the order established by Amma, thereby destabilizing the universe. In order to purify the cosmos and restore its order, Amma sacrificed another of the Nommo, whose body was cut up and scattered throughout the universe. This distribution of the parts of the Nommo’s body is seen as the source for the proliferation of Binu shrines throughout the Dogon region.

In addition to containing parts of Nommo’s body, Binu shrines house spirits of mythic ancestors who lived in the legendary era before the appearance of death among mankind. Binu spirits often make themselves known to their descendants in the form of an animal that interceded on behalf of the clan during its founding or migration, thus becoming the clan’s totem. The priests of each Binu maintain the sanctuaries, whose facades are often painted with graphic signs and mystic symbols. Sacrifices of blood and millet porridge (millet being the primary crop of the Dogon) are made at the Binu shrines at planting time and whenever the intercession of the immortal ancestor is desired. Through such rituals, the Dogon believe that the benevolent force of the ancestor is transmitted to them. 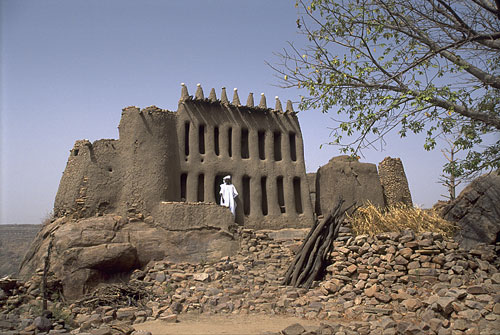 In the late 1940’s, Dogon priests greatly surprised the French anthropologists Griaule and Dieterlen by telling them secret Dogon myths about the star Sirius (8.6 light years from the earth). The priests said that Sirius had a companion star that was invisible to the human eye. They also stated that the star moved in a 50-year elliptical orbit around Sirius, that it was small and incredibly heavy, and that it rotated on its axis.

All these things happen to be true (the actual orbital figure is 50.04 +/- 0.09 years). But what makes this so remarkable is that the companion star of Sirius, called Sirius B, was first photographed in 1970. While people began to suspect its existence around 1844, it was not seen through a telescope until 1862. The Dogon beliefs, on the other hand, were supposedly thousands of years old. The Dogon name for Sirius B (Po Tolo) consists of the word for star (tolo) and "po," the name of the smallest seed known to them. By this name they describe the star's smallness -- it is, they say, "the smallest thing there is." They also claim that it is "the heaviest star," and white. The tribe claims that Po is composed of a mysterious, super-dense metal called sagala, which they declare is heavier than all the iron on Earth. Not until 1926 did Western science discover that this tiny star is a white dwarf, a category of star characterized by very great density.

Many artifacts were found describing the star system, including a statue examined by Dieterlen that is at least 400 years old. The Dogon also describe a third star in the Sirius system, called Emme Ya. Larger and lighter than Sirius B, this star revolves around Sirius as well. Around the star Emme Ya orbits a planet from which the mythic Nommos originally came. To date, however, astronomers have not identified Emme Ya. Will our celestial observation devices one day be powerful enough for us to find this legendary planet, thereby adding still more mystery to the extraordinary - seemingly impossible - astronomical knowledge of the Dogon? In addition to their knowledge of the Sirius group, the Dogon mythology includes Saturn's rings and Jupiter's four major moons. They have four calendars, for the Sun, Moon, Sirius, and Venus, and have long known that planets orbit the sun. The Dogon say their astronomical knowledge was given to them by the Nommos, amphibious beings sent to Earth from Sirius for the benefit of mankind. The word Nommos comes from a Dogon word meaning, "to make one drink," and the Nommos are also called Masters of the Water, the Monitors, and the Teachers.

The Dogon myths tell the legend of the Nommos, who arrived in a vessel along with fire and thunder. After they arrived here - they put out a reservoir of water onto the Earth then dove into the water. There are references in the oral traditions, drawings and tablets of the Dogons, to human-looking beings who have feet but who are portrayed as having a large fish skin running down their bodies. The Nommos were more fishlike than human and had to live in water. They were saviors and spiritual guardians: "The Nommo divided his body among men to feed them; that is why it is also said that as the universe "had drunk of his body," the Nommo also made men drink. He gave all his life principles to human beings." The Nommo was crucified and resurrected and in the future will again visit the Earth, this time in human form. Similar creatures have been noted in other ancient civilizations -- Babylonia's Oannes, Acadia's Ea, Sumer's Enki, and Egypt's goddess Isis.

The photographs show Binu shrines near Sangha and Arou-by-Ibi (the ostrich eggs atop the roof spires symbolize fertility and purity). Readers wishing to study the Dogon in more detail are encouraged to consult the writings of Marcel Griaule, Pascal Imperato, Robert Temple, and Shannon Dorey listed in the bibliography. Portions of the foregoing information were taken from these authors. 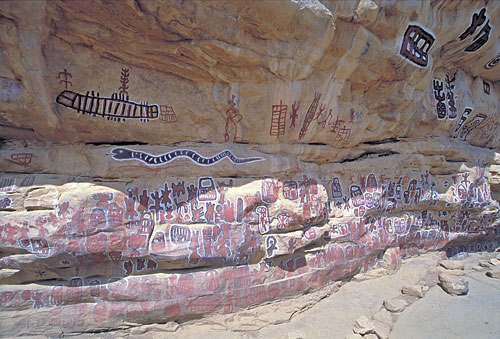 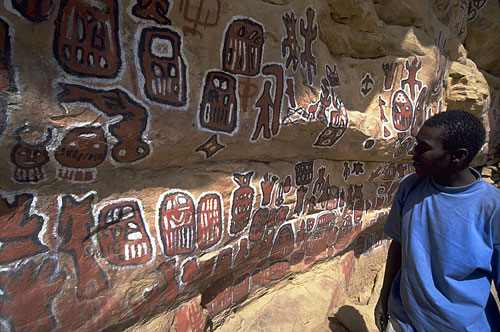 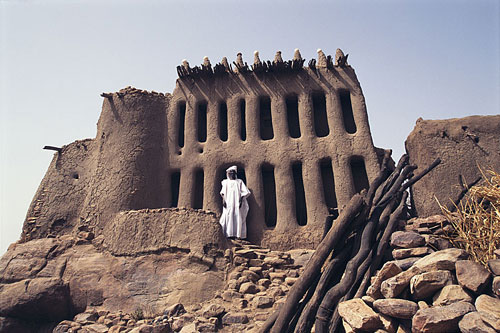