COINS OF THE NATURAL WORLD
A new book by Martin Gray

We have living beings shown on our money,
let’s use that money to protect them.

During the past twenty-five years thousands of species of animals, birds, fish and plants have been taken to the brink of extinction and beyond because of mankind’s destruction of the natural world. The rate of extinction is increasing every day with more than one species currently becoming extinct every 20 minutes.

The nations of the world spend trillions of dollars on weapons and military expenditures, but only a fraction of that on the protection of the natural world. The living species we humans share the planet with have as much right to life as we do and it is only through our actions that we can protect and save them. 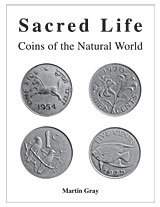 Featuring hundreds of close-up photographs of beautiful coins from around the world and showing a large variety of animals, plants, birds and fish, Sacred Life is a visual feast and a plea for respect of the natural world. These are not valuable coins but they illustrate the greatest value of all, which is life. Money can cause harm or promote life. The choice is ours.

Martin Gray is a National Geographic photographer whose work focuses on the protection of art, sacred architecture and cultural diversity. He has traveled extensively in more than one-hundred and twenty five countries. His books include The Geography of Religion by National Geographic and Sacred Earth by Barnes & Noble. His web site, World Pilgrimage Guide at SacredSites.com is visited by millions of people each year.

Sacred Life: Coins of the Natural World can be ordered from Amazon.com