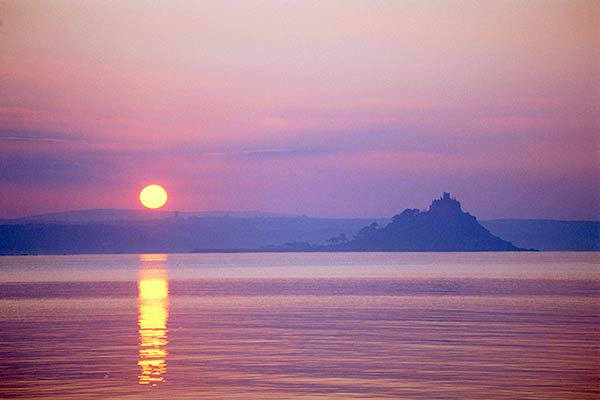 Situated on either side of the English Channel and precariously perched upon coastal rock outcroppings are the famous medieval pilgrimage shrines of St. Michael's Mount and Mont Saint-Michel. At both sites, visions of the archangel were seen during the fifth century and the histories of the two shrines are intimately connected with one another.

Guarding the entrance to the Land's End district of Cornwall, the English Mount was known as a port and trading post (for tin and copper) from as early as 350 BC. Following the defeat of the seafaring merchants who controlled the mount by the Roman Julius Caeser in 56 BC, the small island was abandoned to hermits and mystics. Legends tell of a visit by St. Keyne and a spring that miraculously gushed forth when she set foot upon the rock in 490 AD. The event that most clearly stimulated Christian pilgrimages to the mount however, was an apparition of St. Michael to a fisherman in 495 AD. According to different versions of the legend, St. Michael was observed either high upon a rocky ledge or walking upon the waters of Mount Bay. Whatever the case, the mount quickly became an important sacred site that would continue to draw pilgrims from throughout England for 1500 years. During its long history after the apparition, the Mount has been a church, a priory, a military fortress, and a private castle of the St. Aubyn family. Today the castle and shrine are maintained by the National Trust, an independent organization devoted to the preservation of British antiquities. Both tourists and religious pilgrims visit the site.

In studying St. Michael's Mount two interesting matters come to light. The first regards the legendary accounts of apparitions of the archangel. According to various reckonings, St. Michael was said to have miraculously appeared in over 400 places throughout Britain and Europe during the 4th and 5th centuries. At a large percentage of these sites he was supposed to have slain dragons. This author finds it remarkable that paleontological excavations have brought to light large numbers of dinosaur bones from hundreds of millions of years ago yet not one single dragon bone from only 1500 years ago. This lack of evidence for the existence of dragons, at least in early medieval times, must cause any intelligent person to question the Christian story of St. Michael. Did the archangel really appear and did he really slay dragons, or should the myth be understood as having a metaphorical rather than literal meaning?

Throughout the world different cultures have memorialized the power places and the enigmatic apparitions that occurred at them with myths and legends, drawings and carvings of dragons, serpents and giant snakes. These iconographic representations of the earth spirit and its mystic powers are methods whereby peoples' experiences of the unexplainable were symbolically communicated over long periods of time. Snakes live beneath the surface of the ground and thus were universally used to symbolically depict the mysterious forces of the underworld (it is also true that various species of snakes live in trees and there is much ancient iconography depicting serpents and dragons sinuously wound round the great Earth Tree whose roots reach into the underworld).

Yet there is still more to this matter, and the Christian myth of the dragon-slaying St. Michael may be further unraveled. Many pre-Christian legends, in those areas of Europe with standing stones in the countryside, have references to giants or normal persons who 'speared a serpent' or 'captured the dragon forces' at a specific site by the placement of a great stone into the body of the earth. Even more telling is the fact that many Christian sacred sites were, prior to the arrival of Christianity, known as dragon's dens and serpent's lairs. The Christian story of St. Michael spearing a pagan serpent may thus be seen as a usurpation of a far older pagan myth. It is truly one of the sweetest ironies that while the Christian symbol of St. Michael was intended to depict the so-called 'victory' of the new faith over the old, it does so with a graphic form that actually perpetuates the pagan myths which the Christians sought to eradicate.

A second fascinating matter that presents itself to the student of St. Michael shrines in Britain is the extraordinary linking of those shrines by straight lines running for hundreds of miles across the countryside. One example is the line, which originating at St. Michael's Mount in Cornwall, goes on to pass through the pre-Druid/Druid sacred site of Cheesewring, through the St. Michael's churches at Brentor, upon the Neolithic mound of Burrowbridge Mump, and upon Glastonbury Tor, and thence continues on to the stone rings of Avebury. These places listed here are only the better known sites along this particular line; there are indeed many other earth and stone structures along the line and all of them predate the arrival of Christianity by thousands of years. Readers interested in learning more about these lines linking sacred sites around the world will find the matter discussed in more detail in the writings of John Michell, Hamish Miller, and Paul Broadhurst, listed in the bibliography on this web site.

The Abbey of Mont Saint-Michel (France) is positioned on the axis 64 degrees off North. This direction faces towards the sunrise of the 8th of May, traditionally the St. Michel day of Spring. The opposite direction shows the sunset of the 6th August, Transfiguration of Christ. 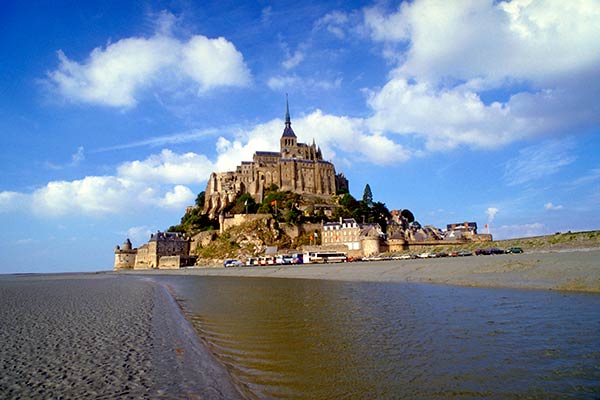