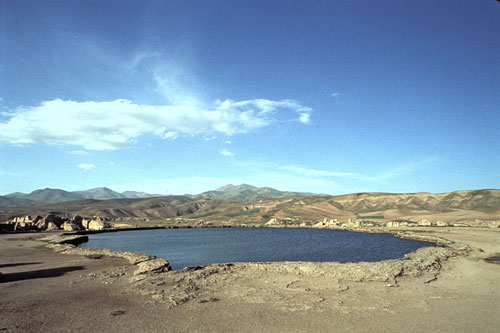 
Located in a mountainous area of northwestern Iran and 42 kilometers north of the village of Takab, Takht-e Suleiman (the ‘Throne of Solomon’) is one of the most interesting and enigmatic sacred sites in Iran. Its setting and landforms must certainly have inspired the mythic imagination of the archaic mind. Situated in a small valley, at the center of a flat stone hill rising twenty meters above the surrounding lands, is a small lake of mysterious beauty. Brilliantly clear but dark as night due to its depth, the lake’s waters are fed by a hidden spring far below the surface. Places like this were known in legendary times as portals to the underworld, as abodes of earth spirits.

Archaeological studies have shown that human settlements existed in the immediate region since at least the 1st millennium BC, with the earliest building remains upon the lake-mound from the Achaemenian culture (559-330 BC). During this period the fire temple of Adur Gushasp (Azargoshnasb) was first constructed and it became one of the greatest religious sanctuaries of Zoroastrianism, functioning through three dynasties (Achaemenian, Parthian, Sassanian) for nearly a thousand years. In the early Sassanian period of the 3rd century AD, the entire plateau was fortified with a massive wall and 38 towers. In later Sassanian times, particularly during the reigns of Khosrow-Anushirvan (531-579 AD) and Khosrow II (590-628 AD), extensive temple facilities were erected on the northern side of the lake to accommodate the large numbers of pilgrims coming to the shrine from beyond the borders of Persia. Following the defeat of Khosrow II’s army by the Romans in 624 AD, the temple was destroyed and its importance as a pilgrimage destination rapidly declined. During the Mongol period (1220-1380), a series of small buildings were erected, mostly on the southern and western sides of the lake, and these seem to have been used for administrative and political rather than religious functions. The site was abandoned in the 17th century, for unknown reasons, and has been partially excavated by German and Iranian archaeologists in the past 100 years. 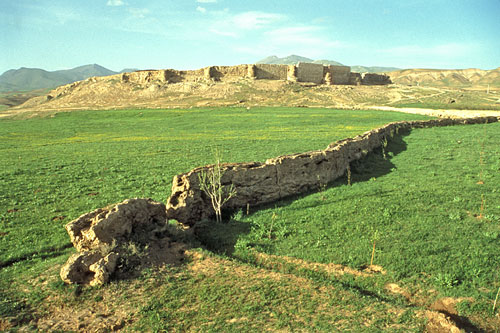