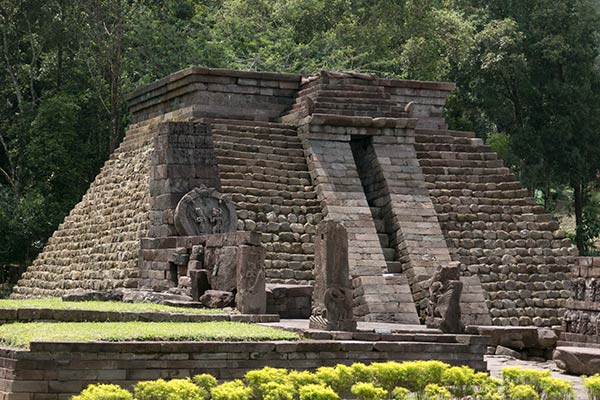 Located near the village of Berjo at an elevation of 2990 feet (910 meters) on the forested slopes of Mount Lawu, a dormant volcano in central Java, the Candi Sukuh temple is stylistically unlike any other in Indonesia. Possibly constructed in the 15th century during the declining years of the Hindu Majapahit Empire (1293-1527), Candi (pronounced Chandi) Sukuh seems to have little to do with other Javanese Hindu and Buddhist temples. Constructed with volcanic andesitic rocks and covering an area of approximately 11,000 square meters, the temple complex features three terraces, a remarkable pyramid, and numerous enigmatic sculptures. The origins of its builders and their strange sculptural style (with crude, squat and distorted figures carved in the wayang style found in East Java) remain a mystery and it seems to mark a reappearance of the pre-Hindu animism that existed 1500 years earlier.

Two things in particular distinguish Candi Sukuh, which are its unique truncated, trapazoidal pyramid, resembling those of the Maya in Yucatan, Mexico, and the numerous enigmatic sculptures found throughout the site.

The pyramid rises to ten meters at the rear of the site and different legends have been attributed to its meaning and function. One legend says it represents the mythological sacred mountain of Meru, the dwelling place of the gods and ancestors. Another that it represents Mount Mandera where Vasuki, the king of the serpents, allowed several gods and demons to use him as their churning rope to extract the ambrosia of immortality from the ocean of milk. There is currently nothing atop the pyramid yet there may once have been various sculptures, altars or other structures. The pyramid may be climbed via a narrow stairway and local folk legends assert that the steps are steep in order to test the virginity of young girls in the community. Immediately in front of the stairs are two large tortoise statues with flattened upper surfaces, these perhaps functioning as altars for purification rituals and ancestor worship. In Hindu mythology, the tortoise symbolizes the support of the world and is an avatar of the god Vishnu. 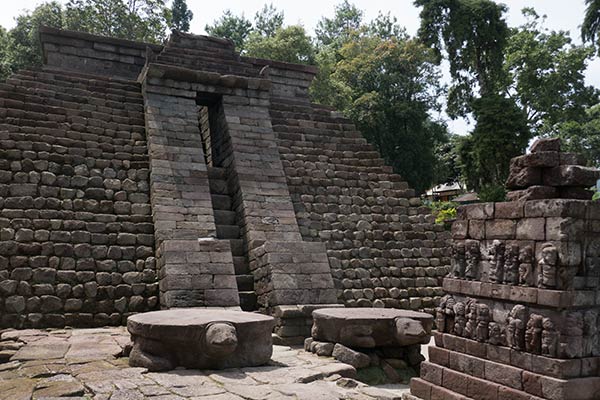 In 1815, Sir Thomas Raffles, the ruler of Java during 1811–1816, visited the temple and found it in poor condition. In his account, he relates that many statues had been thrown down on the ground and most of the figures had been decapitated. This vandalism of traditional culture is likely to be an effect of the Islamic invasion of Java during the 16th century. Raffles also found adjacent to the tortoises a giant 6-foot linga (phallus) statue broken into two pieces. The linga has the distinctive feature that all of the phalluses on the temple have; balls under tip. These are representative of a custom practiced by the aristocratic and priestly castes of the Majapahit Empire, where some men would have marble or gold balls implanted under the tip of their penis. The Candi Sukuh linga, which is now displayed in the National Museum in Jakarta, has four.

At the entrance to the site is an obvious depiction of sexual intercourse; a stone lingam (phallus) entering a yoni (vagina). Whatever its purpose in ancient times, childless couples today come to seek blessings and pray for children. Further on are sculptures depicting Bhima, the great warrior-hero of the Mahabharata, and Narada, the messenger of the gods, inside a stylized womb, and another showing Bhima passing through the womb at his birth. It is important to note that Bhima was the central figure of a cult of the deliverance of souls during the fifteenth century and a spiritual guide who knew the path that led to perfection. Other carvings of an erotic nature include a large headless statue of a man grasping his erect penis, a carving of a squatting man exposing his genitals, and a carving resembling a womb with mythological creatures in it. 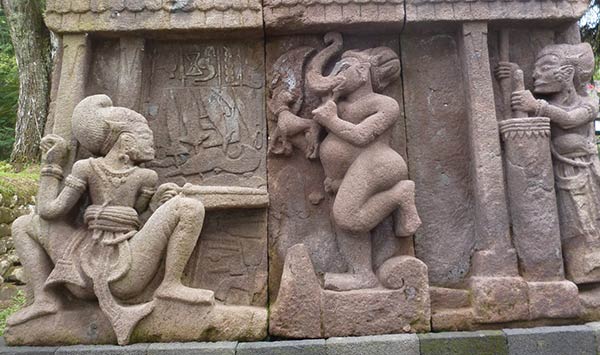 Sculpture of metal forge with Bhima, Ganesh and Arjuna (Enlarge)

Near the pyramid is an important sculpture featuring Bhima, Arjuna and Ganesh working in a metal forge. This scene is significant because in Hindu-Java mythology the smith, the metal worker, is believed to possess not only the skill to alter metals, but also the key to spiritual transcendence. Smiths drew their powers from the god of fire (which existed prior to the introduction of Hinduism) and in some cases a smithy was considered a shrine.

In this particular scene Bhima is the blacksmith and his brother, Arjuna, is working the bellows. They are forging a sword with purifying fire, which symbolizes various things here. It represents the linga (phallus) and its sheath the yoni (vagina), as a weapon it makes Arjuna invincible in battle, and it is a kris, the iconic Javanese dagger that legitimized and empowered rulers. Between Bhima and Arjuna is a dancing Ganesh, the Hindu god and Tantric deity who embodies the process of crossing from one state to another. This is an unusual representation of Ganesh, for not only is he dancing but his genitals are also exposed, there is a rosary of bones around his neck, and he is holding a small animal, probably a dog. This carving shows a distinct similarity with Tantric practices found in Tibetan Buddhism, where bone rosaries and dog deities figure prominently in rituals of spiritual transformation.

According to the scholar Stanley O'Connor, the relief shows in visual terms the correspondence between metallurgy and human fate. Iron working was a metaphor for spiritual transformation. By illustrating the process through which the metallic substances are transformed (the reduction of ores, their purification, and then reconstitution into steel), the sculptor has shown the connection between metallurgy and the liberation of the soul. Additionally, in the sculpture it is the wild energetic dance of Ganesh, the guardian of thresholds, who breaks open a path for the soul to a higher plane.

The first studies of the Candi Sukuh were done in 1842, 1889 and 1910. Between 2014 and 2017 the government archaeological department conducted an extensive reconstruction of the site. The temple, originally built on a foundation of river sand and loose stones, had been mined for these materials by local people and had begun to sink. 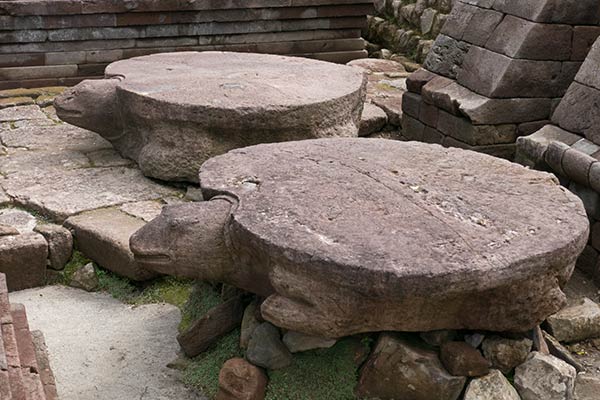