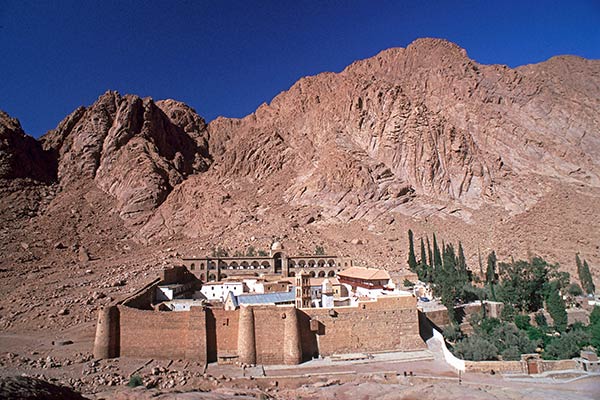 
In the Judeo-Christian region of the Middle East there are four primary sacred mountains: Mt Ararat in eastern Turkey, the traditional landing place of Noah's ark; Mt. Sinai in the Sinai peninsula, the peak where Moses received the Ten Commandments; Mt. Moriah or Mt. Zion in Israel, where lies the city of Jerusalem and the Temple of Solomon; and Mt. Tabor in Israel, the site of the transfiguration of Jesus. Mt. Sinai, also called Mt. Horeb and Jebel Musa (the 'Mountain of Moses') is the center of a greatly venerated pilgrimage destination that includes the Monastery of St. Catherine and the Burning Bush, Elijah's Plateau, and the Plain of ar-Raaha.

Moses, the traditional founder of Judaism, was born in Egypt, the son of a Hebrew slave. The Hebrews had been in bondage in Egypt for four hundred years from approximately 1650-1250 BC. Near the end of this period an Egyptian priest in the service of the Pharaoh made a prophecy that a child would be born to the Hebrews that would one day free them from their slavery. The Pharaoh, on hearing this prophecy, ordered that every male child born to the Hebrews should be killed by drowning. In hopes of preventing his death, Moses' parents placed him in a small basket, which they set adrift on the Nile. He was found by the daughter of the Pharaoh and subsequently raised as an adopted son of the royal family. During his upbringing he was extensively educated in the esoteric and magical traditions of the Egyptian mystery schools. At the age of forty Moses discovered that his original people, the Hebrews, were in bondage to the Egyptians. Enraged at this cruel treatment, he killed an Egyptian overseer and fled into exile into the Sinai wilderness.

Approximately forty years later, while grazing his flocks on the side of Mt. Horeb, Moses came upon a burning bush that was, miraculously, unconsumed by its own flames. A voice speaking out of the fire (Exodus 3:1-13) commanded him to lead his people out of bondage in Egypt and return with them to the mountain. Upon his return Moses twice climbed the mountain to commune with god. Regarding the second ascent, Exodus 24:16-18 states: And the glory of the Lord abode upon mount Sinai, and the cloud covered it six days; and the seventh day God called unto Moses out of the midst of the cloud. And the appearance of the glory of the Lord was like devouring fire on the top of the mount in the eyes of the children of Israel. And Moses entered into the midst of the cloud, and went up into the mount; and Moses was in the mount forty days and forty nights. During this time on the mountain Moses received two tablets upon which God had inscribed the Ten Commandments, as well as precise dimensions for the Arc of the Covenant, a portable box-like shrine that would contain the tablets. Soon thereafter, the Arc of the Covenant was constructed and Moses and his people departed from Mt. Sinai. 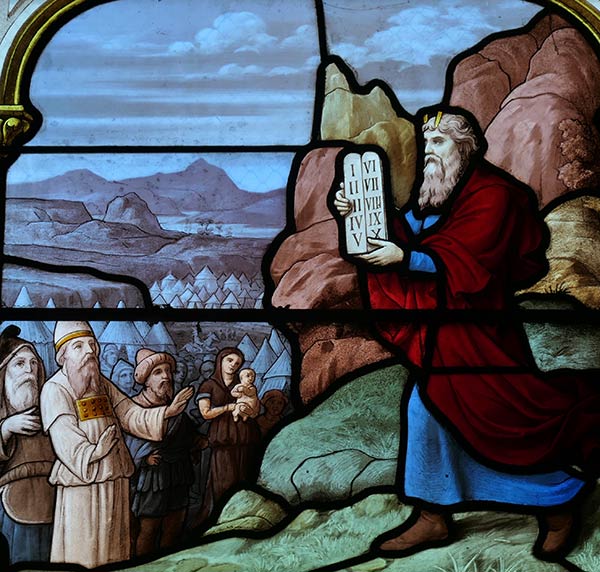 The Arc of the Covenant and its supposedly divine contents are one of the great mysteries of antiquity. According to archaic textual sources the Arc was a wooden chest measuring three feet nine inches long by two feet three inches high and wide. It was lined inside and out with pure gold and was surmounted by two winged figures of cherubim that faced each other across its heavy gold lid. Some scholars believe that the Arc may have contained, in addition to the Tablets of the Law, pieces of meteorites and highly radioactive rocks. In the ensuing two hundred and fifty years, between the time it was taken from Mt. Sinai to when it was finally installed in the temple in Jerusalem, the Arc was kept for two centuries at Shiloh, was captured by the Philistines for seven months, and then, following its return to the Israelites, was kept in the village of Kiriath-Jearim. During this entire time it was associated with numerous extraordinary phenomena, many of which involved the killing or burning of often large numbers of people. Passages in the Old Testament give the impression that these happenings were divine actions of Yahweh, the god of the Hebrews. Contemporary scholars, however, believe that there may be another explanation. Writing in The Sign and the Seal (concerning his search for the lost Arc of the Covenant), Graham Hancock suggests that the Arc, and more precisely its mysterious contents, may have been a product of ancient Egyptian magic, science and technology. Moses, being highly trained by the Egyptian priesthood, was certainly knowledgeable in these matters and thus the astonishing powers of the Arc and its 'Tablets of the Law' may have derived from archaic Egyptian magic rather than the mythical god Yahweh.

Currently there is no archaeological evidence that the 7507 foot (2288 meter) granite peak of Jebel Musa on the Sinai Peninsula is the actual Mt. Sinai of the Old Testament, and various scholars, such as Emmanuel Anati, writing in his comprehensive study, The Mountain of God, have proposed several alternative locations. The association of Jebel Musa with the Biblical Mt. Sinai seems to have first developed in the 3rd century AD when hermits living in caves on the mountain began to identify their mountain with the ancient holy peak.

On the peak of Jebel Musa stands a small chapel dedicated to the Holy Trinity. This chapel, constructed in 1934 on the ruins of a 16th church, is believed to enclose the rock from which God made the Tablets of the Law. In the western wall of this chapel is a cleft in the rock where Moses is said to have hidden himself as God's glory passed by (Exodus 33:22). Seven hundred and fifty steps below the summit and its chapel is the plateau known as Elijah's Basin, where Elijah spent 40 days and nights communing with God in a cave. Nearby is a rock on which Aaron, the brother of Moses, and 70 elders stood while Moses received the law (Exodus 24:14). Northwest of Elijah's plateau hardy pilgrims visit Jebel Safsaafa, where Byzantine hermits such as St. Gregory lived and prayed. Beneath the 2168 meter summit of Ras Safsaafa stands the Plain of ar-Raaha, where the Israelites camped  at the time Moses ascended the mountain and where Moses erected the first tabernacle.

The assumed identification of Jebel Musa with the Biblical Mt. Sinai was a powerful attraction to hermits and pilgrims of the early Christian era. Certainly the most famous of these pilgrims was Helena, a 4th century Byzantine empress who confirmed her belief in the authenticity of Jebel Musa by constructing the first church in the area. Traditionally called the Chapel of the Burning Bush, it was constructed at the exact site where grew a rare specimen of Rubus sanctus, the still-living shrub which the monks believe is the original Burning Bush. A monastic community soon developed around this chapel and, to protect both the monks and the chapel from the attacks of roving Bedouin marauders, the Byzantine Emperor Justinian I built a fortress-like basilica around the chapel in 542 AD. The basilica was called the Church of Transfiguration, in memory of the transfiguration of Jesus in the presence of Moses and Elijah on sacred Mt. Tabor.

The Monastery of the Transfiguration is also called St. Catherine's Monastery after the early Christian martyr, St. Catherine. Born as Dorothea of Alexandria in 294 AD, she was later tortured and beheaded by the Roman emperor Maximus for incessantly criticizing him for his worship of pagan idols. Legend says Catherine's body miraculously vanished and was transported by a band of angels to the top of Jebel Katerina, the highest peak in the Sinai Peninsula. Three centuries later, monks found her supposedly uncorrupt body and brought it down to the Monastery of the Transfiguration, where some of her relics and certainly her name remain to this day.

After the Empress Helena, the next famous pilgrim to the Jebel Musa and the monastery was the Prophet Mohammed. Being well treated by the Orthodox Christian monks, Mohammed gave his personal pledge of protection, which then became incumbent on all Muslims thereby ensuring the monasteries continued existence. Records maintained at the Monastery of the Transformation indicate that during the 12th through the 14th centuries many thousands of pilgrims came annually and that the journey from Cairo took eight days by foot and camel. Following the Reformation, the popularity of pilgrimage drastically declined and until the mid 1900's no more than 80-100 pilgrims made the arduous journey each year. In the 1950's the Egyptian government paved roads leading to oil fields and mines along the western Sinai and also developed a dirt track to the foot of Jebel Musa and the monastery, which allowed increasing numbers of secular tourists to travel in taxis from Cairo. The Israeli occupation the Sinai in 1967, the return of the region to Egypt in 1980, and the completion of a paved road further increased the number of visitors to Jebel Musa. Bus service to and from Cairo became available on a daily basis in 1986 and today it is not uncommon for a hundred or more pilgrims and tourists to visit the ancient sacred site in a single day. Currently Greek Orthodox monks tend the monastery and its extraordinary collection of Byzantine art.