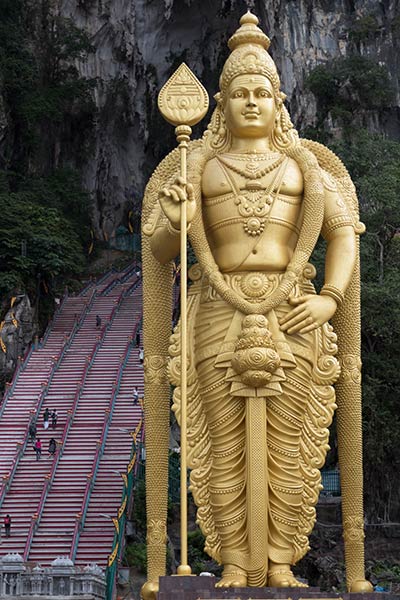 The Batu Caves Temple, located fifteen kilometers north of Kuala Lumpur, the capital city of Malaysia, is the most important Hindu pilgrimage site in Southeast Asia. Dedicated to the Hindu deity Muruga, the temple is visited by several million pilgrims each year.

Muruga, also known as Kartikeya, Skanda and Subramaniyam, is the son of Shiva (the generator, protector and destroyer of the universe) and Parvati (the Hindu goddess of fertility, love and devotion), the younger brother of elephant-headed Ganesh, and a philosopher-warrior. He is greatly loved by the Tamil people of South India and his shrines are found wherever they settled in Asia, particularly Sri Lanka, Malaysia, Indonesia and Singapore. Muruga's iconography varies significantly, reflecting the variation in his legends. He is typically represented as an ever-youthful man, riding or near a peacock. Most icons show him with one head, but some show him with six heads reflecting the legend surrounding his birth when six mothers - symbolizing the six stars of Pleiades – assisted with his birth. He is the chief of the army of the devas (benevolent supernatural beings), is considered to be the embodiment of Shiva's light and wisdom, and devotees pray to him to overcome the obstacles they face, as he is the divine vanquisher of evil.

The Batu caves are part of a craggy limestone massif, estimated to be 400 million years old, known as Bukit Batu (meaning Rocky Hill) and their name derives from that of a nearby river known as Sungai Batu, (meaning Rocky River). The caves, once used as shelters by the Temuan people of the Orang Asli tribe and later by Chinese settlers excavating bat guano for fertilizer, became more widely known in the late 19th century after British colonial authorities and the American Naturalist William Hornaday recognized their scientific importance. In 1891, the Malaysian-Indian businessman K. Thamboosamy Pillai established the first temple dedicated to Muruga at the caves. He was inspired to do so because the entrance of the main cave resembled the shape of a lance, called a vel, given to Muruga by Parvati so he could destroy an evil demon named Soorapadman. 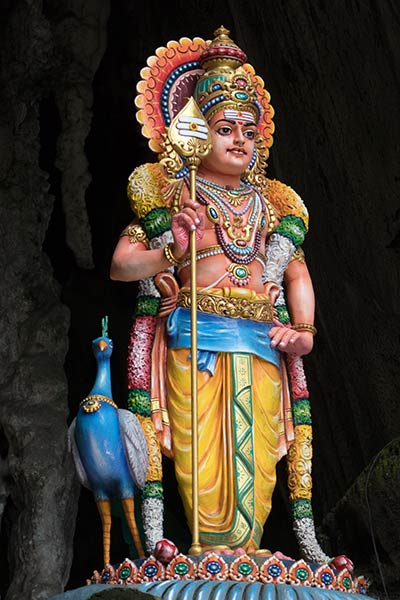 Statue of Muruga at entrance of Batu Caves (Enlarge)

The Batu Caves Muruga temple is the scene each year of a great pilgrimage festival called Thaipusam. Thaipusam falls annually on the full moon day in the Tamil month of Thai, which occurs between January 14th and February 15th. This is when the moon moves through the zodiac period of Cancer according to the Indian Calendar. The Thaipusam festival begins in Kuala Lumpur at the Sri Maha Mariamman temple (which was founded by K. Thamboosamy Pillai in 1873). Throngs of people begin to converge at the Sri Maha Mariamman Temple and Batu Caves on the eve of Thaipusam. The statue of Muruga, which resides in the Maha Mariamman temple throughout the year, is bathed and elaborately decorated in the evening. On the following day it is placed in an ox-drawn chariot that winds its way through the city on its way to the Temple Cave. The gleaming, elaborately lit, silver chariot towers 21 feet above ground level. Devotees carry containers of milk as offering to Muruga, either by hand or on their shoulders in carriers called kavadi. The kavadi are decorated with flowers and peacock feathers imported from India. Upon arriving at the Bukit Batu hill and after bathing in the nearby Sungai Batu River, the devotees climb the 272 steps to the temple in the cave. Devotees carrying the kavadi use the wider center staircase while other worshippers and onlookers throng up and down the balustrades on either side. The Thaipusam festival attracts more than a million worshippers and tourists from within the country and abroad over three days of festivities. 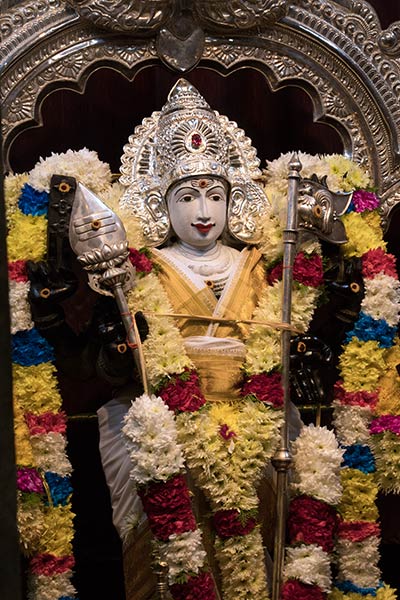 Statue of Muruga in main temple at Batu Caves (Enlarge)

At the base of the hill there are also three other caves and a Hindu temple dedicated to the deities Venkatachalapathi and Alemalu. The three caves are known as the Valluvar Kottam, Art Gallery and the Ramayana Cave, and they contain statues and murals depicting scenes from the Hindu epics, the Ramayana and the Mahabharata, and the lives of famous Tamil poets. Near the entrance of the Ramayana cave stands a 50-foot tall statue of Hanuman, the devotee and servant of Rama. Venkatachalapathi, or Venkateswara, is a form of the Hindu god Vishnu and his primary shrine is located at Tirumala in Southern India. Alamelu, also known as Padmavati, is a form of Lakshmi, the Hindu goddess of wealth and good fortune, and the consort of Venkatachalapathi.

The Batu Caves Temple, also called Batumalai Sri Muruga Prumal Kovil, is one of the ten most important shrines to Muruga; six are in India and four in Malaysia (Batu Caves, Tanneermalai temple in Penang, Sannasimalai temple in Malacca, and Kallumalai temple in Ipoh).