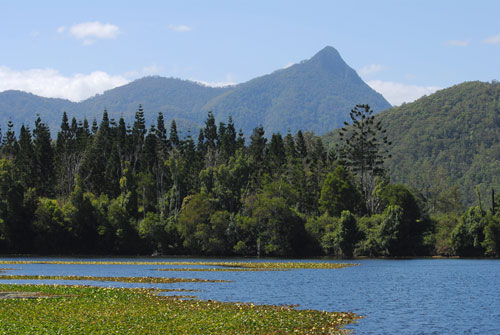 
The sacred mountain of Wollumbin is located in a warm subtropical rainforest approximately 120 kilometers south of Brisbane in the state of New South Wales. Rising to 1156 meters (3793 ft), it is a holy place to many Aboriginal Communities. The mountain remains a place of cultural and traditional significance to the Bundjalung people and is the site of different ceremonies and initiation rites. In Aboriginal legend, Wollumbin was a giant bird, speared by a warrior. That fatal spear is still visible as a point on the summit. Other legends say fighting warriors cause the lightning and thunder often observed on the mountain.

Captain James Cook gave Wollumbin the name Mount Warning in May 1770. It was a landmark to 'warn' mariners of offshore reefs that are found in the area. Wollumbin-Mount Warning is the remnant central plug of the Tweed shield volcano, one of the largest and best examples of an erosion caldera in the world. Wollumbin-Mt Warning became a National Park in 1967 and was added to the United Nations World Heritage list in 1975. A steep and winding path leads to the summit of the mountain where a viewing platform is located and the roundtrip hike is approximately 9 kilometers.

The Bundjalung people observe cultural and traditional restrictions forbidding the uninitiated from climbing the mountain, and, as such, ask that others also do not attempt to climb the mountain. The government National Parks and Wildlife Service advertise this request and do not encourage climbers to hike the Mt. Warning/Wollumbin Trail up the mountain, but it is not forbidden by park regulations. More than 100,000 people climb the mountain each year despite signage indicating the aboriginal community’s views on climbing.

Outside the nearby town of Nimbin is another Aboriginal sacred place known as the Nimbin Rocks. An Aboriginal Dreamtime story relates that the word Nimbin is probably derived from the name of Nyimbunji, a shaman with great supernatural powers who once ruled the land for many miles around. He had more power than other men in the area and when people needed food, rain or other things they would go to him. He was generous, wise and kind and would visit the tribal areas to make sure everyone was all right and that they were following the rules and laws. The rocks are still associated with Nyimbunji.