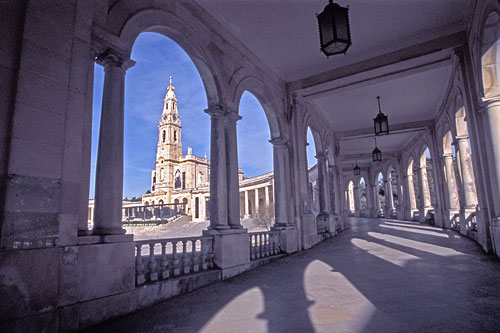 
Located in west central Portugal, in the region of Leiria and approximately 110 kilometers north of Lisbon, the small town of Fatima is one of the most visited Marian shrines in the world today. But unlike many of Europe's great Marian pilgrimage sites, the sanctity of Fatima dates not from the Middle Ages but only from early in the 20th century. Fatima was then a small rural village in a rocky region whose main product was olive oil. There are no historical or legendary accounts of the village or surrounding area having any religious importance in earlier times. In the years 1916 and 1917 a series of apparitions were seen by three young children that were to profoundly alter both their own lives and the atmosphere of the peasant village.

Most textual sources describing the Fatima events mention only the Marian apparitions that occurred in 1917. However, the girl Lucia Santos, the primary recipient of the apparitions, revealed some years later that three other apparitions in 1916, of a male figure, in fact preceded the Marian apparitions of 1917. The story begins early in 1916 when the nine-year old Lucia was sent by her parents to tend the family's sheep in the hills near the village of Fatima. She was accompanied by her cousins Francisco Marto, aged eight, and his six-year old sister, Jacinta. The children were on a hillside when they saw a vision of human figure. Writing many years later of the event, Lucia tells, "It was a figure like a statue..a young man, about fourteen or fifteen, whiter than snow". The figure spoke to the children, directing them to pray three times with him, "My God, I believe, I adore."

Later that same year a second apparition occurred, this time when the children were playing near a well by Lucia's house. The white angel again directed the children to pray with him and told them also that Jesus and Mary had plans for them. A third apparition of this male angel soon followed, near the location of the first apparition, and more lengthy prayers were given to the children. Lucia tells that the angel held some sort of chalice in his hand that he held this in the air as he knelt to pray with the children. The locations of the first and third angelic apparitions, much visited by pilgrims today, are near the path leading from the basilica of Fatima to the hamlet of Aljestrel where the children lived.

The apparitions for which Fatima is known around the world began on May 13, 1917 and continued each month through October, always on the 13th. The first vision came to Lucia and her cousins Jacinta and Francisco as they tended sheep in an isolated ravine called Cova da Iria. The children first saw two flashes of lightening and then a 'Lady, brighter than the sun, shedding rays of light' who said she was from heaven. Lucia - the only one of the three children who ever spoke to the visions - asked, 'What do you want of me?' The Lady answered, 'I want you to come here for sixth months in succession. Then I will tell you who I am and what I want'. The Lady also directed the children to pray every day for peace and for the end of the war that was then destroying Europe, and then she disappeared in a blinding light. The children, unsure of what had happened to them, promised each other to keep quiet but later Jacinta let the matter slip when talking with her parents. Soon the entire village knew of the supposed apparitions and was making fun of the children.

Nonetheless, on the day of the second apparition, on June 17, approximately 60 villagers accompanied the children to the Cova da Iris ravine. The angel, visible only to the three children, again told them to pray and also predicted the deaths of Jacinta and Francisco. As she departed, the villagers saw a cloud rising and the branches of a tree leaning toward the cloud. Following this apparition, the civil authorities of Fatima put pressure on the three children, telling them to deny what they had seen. Undeterred, the children again went to Cova da Iris on July 13, accompanied by several hundred peasants from the local area. Disturbed by the ridicule of the villagers, Lucia asked that a divine sign be shown. In response, the angel promised that in October she would reveal her identity and she also told the children three secrets. The first was a vision of hell "like a sea of fire" to which sinners would go; the second was a prophecy that the people of Russia would be converted if the people prayed; and the third, another prophecy, was kept a secret by Lucia for many years.

Nearly twenty thousand people came from different parts of Portugal and Spain for the August apparition but the children were unable to go to Cova da Iris because the authorities had detained them. The children were interrogated separately, each being told that the others had been boiled alive in oil for their lies, but the children neither recanted nor changed their story. Upon their release, the Lady appeared and repeated her promise of performing a miracle in October. She also asked for a chapel to be built at Cova da Iris. More than thirty thousand people came to Cova da Iris on September 13, as well as members of the press from leading European newspapers. As Lucia spoke to the angel, asking for healings, some of the assembled people saw a globe of light hovering above the children.

The October 17 apparition drew 70,000 people from all parts of Europe. The day was dark and rainy. The apparition announced to the children that she was in fact Mary, the mother of Christ. She asked that prayers be said for the end of World War I and that a church be built in her honor. She then vanished in a blazing light as Lucia cried out, "Look at the Sun" which, however, was hidden behind dark clouds. Many thousands of those gathered reported seeing a movement in the heavens as if the sun were dancing, whirling toward the earth and away again. Others reported feeling the ground shake powerfully beneath their feet. Mysteriously, after the spinning of the great body of light, the crowd found its clothing completely dry and the rains stopped. 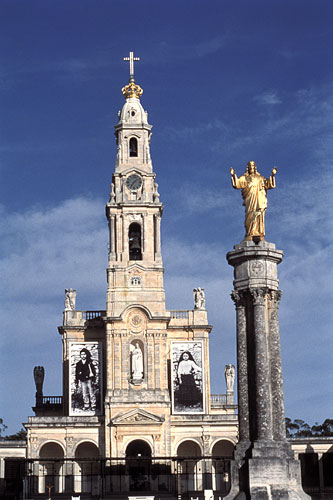 
As prophesized by Mary, both Francisco and Jacinta died soon after the apparitions ended, in 1919 and 1920 respectively. A small chapel built at Cova da Iris was desecrated by skeptics but pilgrims, in the increasing thousands, came unerringly to the holy place. Uncomfortable with the attention brought to her by the apparitions, Lucia left Fatima, became a nun in 1926, and in 1948 entered a Carmelite monastery in Spain. She has only returned to the shrine five times since the church was built. In 1930, after thoroughly investigating the events of 1917, the Vatican authenticated the apparitions, donations arrived from believers around the world and the great basilica of Fatima rose toward the heavens.

It is interesting to note how Orthodox Church authorities in Portugal responded to and used the apparitional events for their own purposes. The apparitions at Cova da Iris occurred during Portugal's First Republic (1911-1926) during which time the church had lost many of its properties and anticlerical feelings were festering around the country. In 1911 the head of state, Alfonso Costa, had even promised to wipe out Catholicism 'within two generations'. The apparitions were therefore used by the church to counter the twin threats of secularization and the decline of religious piety. During the dictatorship of Antonio Salazar, the Fatima apparitions were associated with resistance to communist political movements. In the later years of the 20th century, the Vatican and Pope John Paul II (who particularly loves Marian shrines) have continued to use and accentuate the popularity of Fatima and other Marian shrines in order to bolster the declining influence of Catholicism in contemporary European culture.

The great fame of Fatima, with more than two million pilgrims arriving a year, is not, however, due to the dogma and support of the dictatorial church by rather due to the place that Fatima holds in the hearts and minds of the common people of Portugal, Spain, France and other countries. While the institution of the church allows pilgrimage to the shrine of Fatima, it is uncomfortable with the popular devotion focused on Mary rather than on Christ. Echoing this matter, anthropologist Lena Gemzoe writes that,

"To the clergy and other representatives of the Catholic church, the female/popular forms of Marian devotion displayed at Fatima do not represent the proper way of honouring Mary. The women's acts of devotion, such as walking on one's knees, are tolerated, but many priests seek to combat these forms of religious expression and urge all pilgrims to offer monetary donations instead."

Women are, if fact, the predominant pilgrims to the shrine of Fatima and they come, not to worship Christ but rather to pray and express gratitude to Mary as 'Our Lady of Health' (Nossa Senhora da Sau'de). At Fatima, Mary is not generally approached as the idealized chaste Virgin but rather as a down to earth mother figure that understands, deeply loves, and offers assistance with the concerns of women and children.

During most of the year, the shrine of Fatima is a quiet and peaceful place, visited by locals and the few hundred pilgrims arriving each day from beyond the local area. On May 13, commemorating the day of the first apparition, and on October 13, the day of the final apparition, half a million pilgrims will crowd into the great square in front of the basilica. During these times there is an atmosphere of extremely passionate religious devotion, with hundreds of pilgrims crawling toward the shrine on their knees, thousands making vows, and much praying and weeping. In addition to the basilica and its plaza, pilgrims will visit the Chapel of the Apparitions (Capelinha das Aparicoes), the shrine of Valinhos, where Mary appeared for the fourth time and, two kilometers distant, the house of the 'little shepherds'. Another popular day for pilgrimage activities is June 10, when thousands of young children gather for the 'Pilgrimage of the Little Children (Peregrinacao das Criancinhas).

On May 12, 1982 Pope John Paul II made a pilgrimage to Fatima and expressed thanks to Mary for saving his life during an assassination attempt the previous year. Incorporated into the crown of the statue of Our Lady of Fatima is the bullet removed from the Pope after he had been shot. On May 13th of 2000, the Pope again visited Fatima and this time revealed that part of the so-called "third secret of Fatima" was that Mary had prophesized the1981 assassination attempt and revealed this in her apparition to Lucia in 1917.