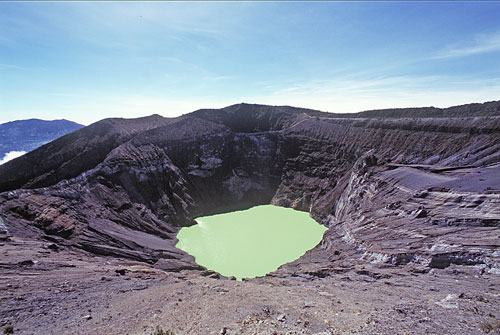 
In Costa Rica there are 112 volcanic formations belonging to the so called Pacific Rim of Fire. Most of these formations are inactive yet seven still emit noxious sulfuric gases and occasionally erupt. The tallest of these peaks were venerated as sacred places, as the abodes of deities in archaic times. Today they are places of sport for hikers and climbers.

Situated thirty-one kilometers from the city of Cartago stands the still active volcano of Irazu. Rising to 11,260 feet (3402 meters, though some sources say 3432), Irazu towers above the surrounding forests which are part of a National Park. The park is remarkable because of its surreal lunar landscape which contains two main craters. The primary crater is round shaped, measures 1050 meters wide by 300 meters deep, and has unusually colored water of a rich and glowing shade of olive green. The second crater is called Diego da la Haya (named in honor of the Spanish conquistador who recorded its eruption in the 18th century), and it is 600 meters in width, and 100 meters deep. The name Irazu (Iztaru) derives from the language of local Indians who used to live upon its slopes. It means "a thunder" or "the place that shakes" or the "mountain of rumbling and trembling”. Volcan Irazu has had a few catastrophic eruptions including one in 1723 which destroyed much of the city of Cartago and one in June of 1963 that covered San Jose with a thick layer of ash. Part of the peak is off limits to visitors due to the precipitous sides and unstable surface. Climbers have fallen hundreds of feet to their deaths in this area. Volcan Irazu is the only place in America from which it is possible to see both the Atlantic and Pacific oceans at the same time.